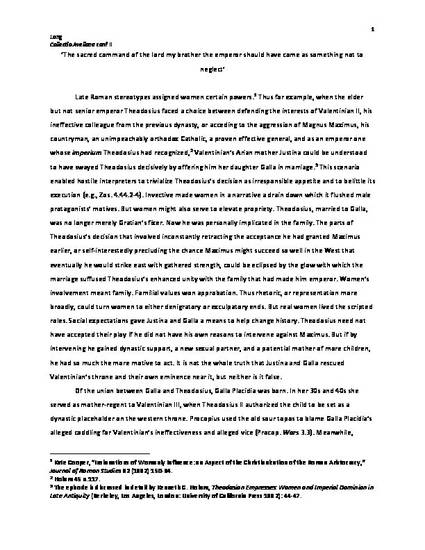 Article
The Sacred Command of the Lord my Brother the Emperor Should Have Come as Something Not to Neglect
CONSTANTINOPLE AND ROME, EAST AND WEST: EMPIRE AND CHURCH IN THE COLLECTIO AVELLANA, 367-553 AD - ROME, 5-6 APRIL 2013
Download
Document Type
Conference Proceeding
Publication Date
Pages
1-8
Disciplines
Abstract

Late Roman stereotypes assigned women certain powers.1 Thus for example, when the elder but not senior emperor Theodosius faced a choice between defending the interests of Valentinian II, his ineffective colleague from the previous dynasty, or acceding to the aggression of Magnus Maximus, his countryman, an unimpeachably orthodox Catholic, a proven effective general, and as an emperor one whose imperium Theodosius had recognized,2 Valentinian’s Arian mother Justina could be understood to have swayed Theodosius decisively by offering him her daughter Galla in marriage.3 This scenario enabled hostile interpreters to trivialize Theodosius’s decision as irresponsible appetite and to belittle its execution (e.g., Zos. 4.44.2-4). Invective made women in a narrative a drain down which it flushed male protagonists’ motives. But women might also serve to elevate propriety. Theodosius, married to Galla, was no longer merely Gratian’s fixer. Now he was personally implicated in the family. The parts of Theodosius’s decision that involved inconstantly retracting the acceptance he had granted Maximus earlier, or self-interestedly precluding the chance Maximus might succeed so well in the West that eventually he would strike east with gathered strength, could be eclipsed by the glow with which the marriage suffused Theodosius’s enhanced unity with the family that had made him emperor. Women’s involvement meant family. Familial values won approbation. Thus rhetoric, or representation more broadly, could turn women to either denigratory or exculpatory ends. But real women lived the scripted roles. Social expectations gave Justina and Galla a means to help change history. Theodosius need not have accepted their ploy if he did not have his own reasons to intervene against Maximus. But if by intervening he gained dynastic support, a new sexual partner, and a potential mother of more children, he had so much the more motive to act. It is not the whole truth that Justina and Galla rescued Valentinian’s throne and their own eminence near it, but neither is it false.

Author Posting. © The Author 2013. This paper is posted here for personal use, not for redistribution. The paper was presented at the Collectio Avellana Conference II, 2013, https://www.luc.edu/collectioavellana/scheduleofevents/2013conference/

Citation Information
Jacqueline Long. "The Sacred Command of the Lord my Brother the Emperor Should Have Come as Something Not to Neglect" CONSTANTINOPLE AND ROME, EAST AND WEST: EMPIRE AND CHURCH IN THE COLLECTIO AVELLANA, 367-553 AD - ROME, 5-6 APRIL 2013 (2013)
Available at: http://works.bepress.com/jacqueline_long/13/
Related Files
Collectio_Avellana_2013_Poster.pdf (356 KB)