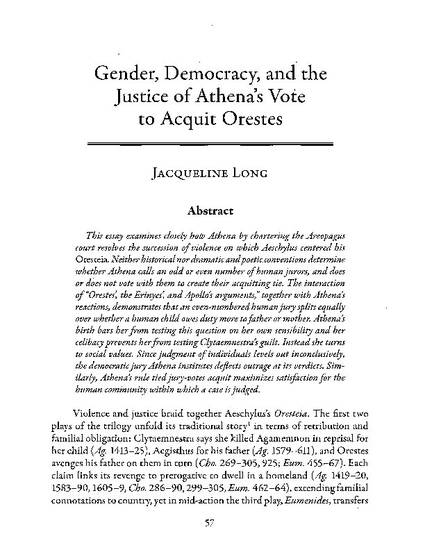 Contribution to Book
Gender, Democracy, and the Justice of Athena’s Vote to Acquit Orestes
Text & Presentation
Download Find in your library
Document Type
Book Chapter
Publication Date
Pages
57-69
Publisher Name
McFarland & Company
Disciplines
Abstract
This essay examines closely how Athena by chartering the Areopagus court resolves the succession of violence on which Aeschylus centered his Oresteia. Neither historical nor dramatic and poetic conventions determine whether Athena calls an odd or even number of human jurors, and does or does not vote with them to create their quitting tie. The interaction of :Orestes', the Erinyes', and Apollo's arguments," together with Athena's reactions, demonstrates that an even-numbered human jury splits equally over whether a human child owes duty more to father or mother. Athena's birth bars her from testing this question on her own sensibility and her celibacy prevents her from Clytemnestra's guilt. Instead she turns to social values. Since judgment of individuals levels out inconclusively, the democratic jury Athena institutes deflects outrage at its verdicts. Similarly, Athena's rule tied jury-votes acquit maximizes satisfaction for the human community within which a case is judged.
Identifier
978-1-4766-6334-0
Comments