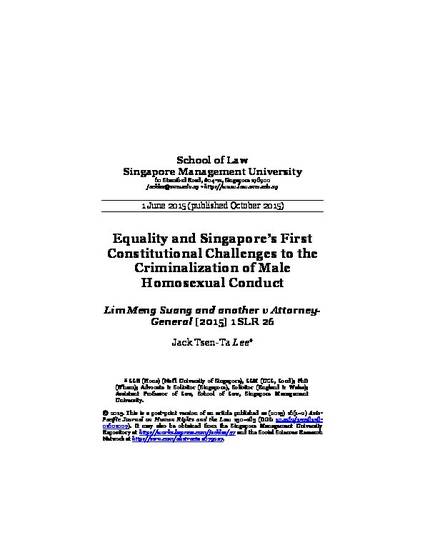 In 2013, in Lim Meng Suang and Kenneth Chee Mun-Leon v Attorney-General and Tan Eng Hong v Attorney-General, the High Court of Singapore delivered the first judgments in the jurisdiction considering the constitutionality of section 377A of the Penal Code, which criminalizes acts of 'gross indecency' between two men, whether they occur in public or private. The Court ruled that the provision was not inconsistent with the guarantees of equality before the law and equal protection of the law stated in Article 12(1) of the Constitution of the Republic of Singapore. The result was upheld in 2014 by the Court of Appeal in Lim Meng Suang and another v Attorney-General with slight differences in the reasoning. This article examines the courts’ analysis of equality law, and submits in particular that the courts ought to re-evaluate whether they should apply a presumption of constitutionality, refuse to assess the legitimacy of the object of the impugned provision, and rely on a standard of mere reasonableness or lack of arbitrariness when determining if a rational relation exists between the provision’s object and the differentia underlying a classification used in the provision.