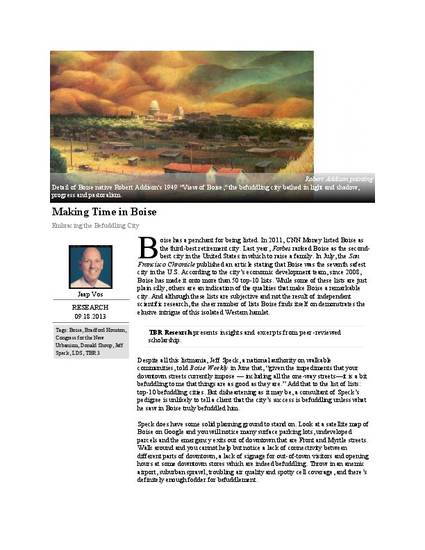 Popular Press
Making Time in Boise: Embracing the Befuddling City
The Blue Review
Download
Document Type
Article
Publication Date
Disciplines
Abstract
Boise has a penchant for being listed. In 2011, CNN Money listed Boise as the third-best retirement city. Last year, Forbes ranked Boise as the second-best city in the United States in which to raise a family. In July, the San Francisco Chronicle published an article stating that Boise was the seventh safest city in the U.S. According to the city’s economic development team, since 2008, Boise has made it onto more than 50 top-10 lists. While some of these lists are just plain silly, others are an indication of the qualities that make Boise a remarkable city. And although these lists are subjective and not the result of independent scientific research, the sheer number of lists Boise finds itself on demonstrates the elusive intrigue of this isolated Western hamlet.
Copyright Statement

Originally published in The Blue Review, an online journal of popular scholarship published by the Boise State University College of Social Sciences and Public Affairs. Provided under a Creative Commons Attribution-NoDerivs license. Details regarding the use of this work can be found at http://creativecommons.org/licenses/by-nd/3.0/.