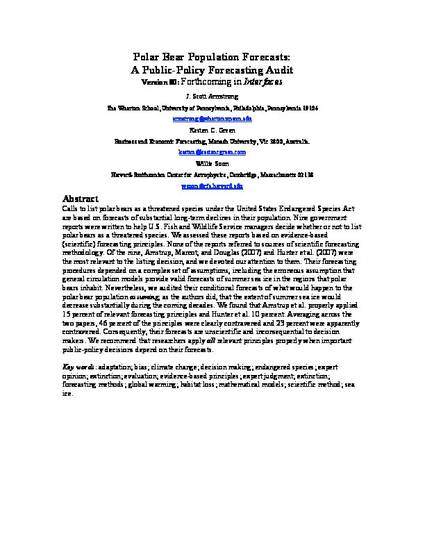 Calls to list polar bears as a threatened species under the United States Endangered Species Act are based on forecasts of substantial long-term declines in their population. Nine government reports were written to help U.S. Fish and Wildlife Service managers decide whether or not to list polar bears as a threatened species. We assessed these reports based on evidence-based (scientific) forecasting principles. None of the reports referred to sources of scientific forecasting methodology. Of the nine, Amstrup, Marcot, and Douglas (2007) and Hunter et al. (2007) were the most relevant to the listing decision, and we devoted our attention to them. Their forecasting procedures depended on a complex set of assumptions, including the erroneous assumption that general circulation models provide valid forecasts of summer sea ice in the regions that polar bears inhabit. Nevertheless, we audited their conditional forecasts of what would happen to the polar bear population assuming, as the authors did, that the extent of summer sea ice would decrease substantially during the coming decades. We found that Amstrup et al. properly applied 15 percent of relevant forecasting principles and Hunter et al. 10 percent. Averaging across the two papers, 46 percent of the principles were clearly contravened and 23 percent were apparently contravened. Consequently, their forecasts are unscientific and inconsequential to decision makers. We recommend that researchers apply all relevant principles properly when important public-policy decisions depend on their forecasts.