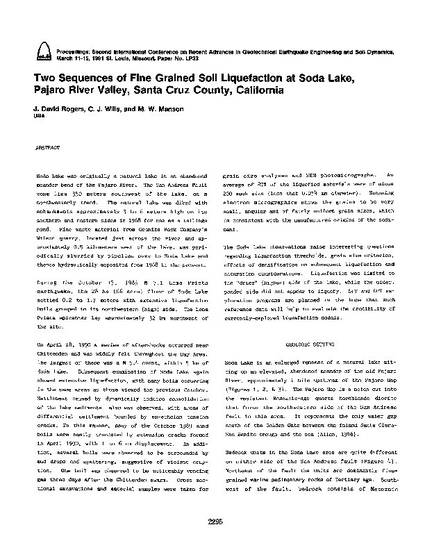 Soda Lake was originally a natural lake in an abandoned meander bend of the Pajaro River. The San Andreas Fault zone lies 350 meters southwest of the lake, on a northwesterly trend. The natural lake was diked with embankments approximately 3 to 6 meters high on its 'southern and eastern sides in 1968 for use as a tailings pond. Fine waste material from Granite Rock Company's Wilson quarry, located just across the river and approximately 0.5 kilometers west of the lake, was periodically slurried by pipeline over to Soda Lake and thence hydraulically deposited from 1968 to the present. During the October 17, 1989 M 7.1 Loma Prieta earthquake, the 28 ha (66 acre) floor of Soda Lake settled 0. 2 to 1.7 meters with extensive liquefaction boils grouped to its northwestern (high) side. The Loma Prieta epicenter lay approximately 32 km northwest of the site. On April 18, 1990 a series of aftershocks occurred near Chittenden and was widely felt throughout the Bay Area. The largest of these was a M 5.4 event, within 5 km of Soda Lake. Subsequent examination of Soda Lake again showed extensive liquefaction, with many boils occurring in the same areas as those viewed the previous October. Settlement caused by dynamically induced consolidation of the lake sediments also was observed, with areas of differential settlement bounded by en-echelon tension cracks. In this manner, many of the October 1989 sand boils were neatly truncated by extension cracks formed in April 1990, with 1 to 6 cm displacement. In addition, several boils were observed to be surrounded by mud drops and spattering, suggestive of violent eruption. One boil was observed to be noticeably venting gas three days after the Chittenden swarm. Cross sectional excavations and material samples were taken for grain size analyses and SEM photomicrographs. An average of 87% of the liquefied materials were of minus 200 mesh size (less than 0.074 mm diameter). Scanning electron micrographics shows the grains to be very small, angular and of fairly uniform grain sizes, which is consistent with the manufactured origins of the sediment. The Soda Lake observations raise interesting questions regarding liquefaction thresholds, grain size criterion, effects of densification on subsequent liquefaction and saturation considerations. Liquefaction was limited to the "drier" (higher) side of the lake, while the older, ponded side did not appear to liquefy. SPT and CPT exploration programs are planned in the hope that such reference data will help to evaluate the credibility of currently-employed liquefaction models.