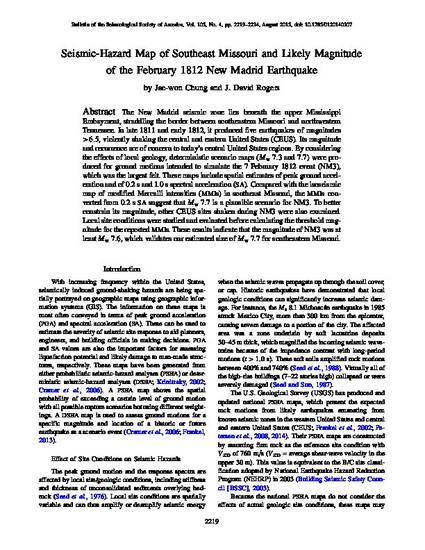 The New Madrid seismic zone lies beneath the upper Mississippi Embayment, straddling the border between southeastern Missouri and northwestern Tennessee. In late 1811 and early 1812, it produced five earthquakes of magnitudes >6.5, violently shaking the central and eastern United States (CEUS). Its magnitude and recurrence are of concern to today's central United States regions. By considering the effects of local geology, deterministic scenario maps (Mw 7.3 and 7.7) were produced for ground motions intended to simulate the 7 February 1812 event (NM3), which was the largest felt. These maps include spatial estimates of peak ground acceleration and of 0.2 s and 1.0 s spectral acceleration (SA). Compared with the isoseismic map of modified Mercalli intensities (MMIs) in southeast Missouri, the MMIs converted from 0.2 s SA suggest that Mw 7.7 is a plausible scenario for NM3. To better constrain its magnitude, other CEUS sites shaken during NM3 were also examined. Local site conditions were studied and evaluated before calculating the threshold magnitude for the reported MMIs. These results indicate that the magnitude of NM3 was at least Mw 7.6, which validates our estimated size of Mw 7.7 for southeastern Missouri.