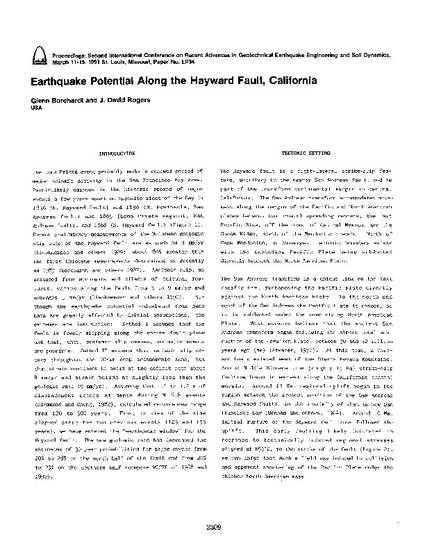 The Loma Prieta event probably marks a renewed period of major seismic activity in the San Francisco Bay Area. Particularly ominous is the historic record of major events a few years apart on opposite sides of the Bay in 1836 (N. Hayward fault) and 1838 (N. Peninsula, San Andreas fault) and 1865 (Loma Prieta segment, San Andreas fault), and 1868 (S. Hayward fault) (Figure 1). Recent preliminary measurements of the Holocene geologic slip rate of the Hayward fault are as much as 9 mm/yr (Lienkaemper and others 1989) - about 80% greater than the first Holocene measurements determined as recently as 1987 (Borchardt and others 1987). Aseismic slip, as measured from monuments and offsets of cultural features, varies along the fault from 3 to 9 mm/yr and averages 5 mm/yr (Lienkaemper and others 1990). Although the earthquake potential calculated from such data are greatly affected by initial assumptions, the extremes are instructive: Method I assumes that the fault is freely slipping along the entire fault plane and that, until aseismic slip ceases, no major events are possible. Method II assumes that aseismic slip occurs throughout the 10-km deep seismogenic zone, but that strain continues to build at the deficit rate about 4 mm/yr and strain builds at slightly less than the geologic rate (9 mm/yr). Assuming that 1.1 to 1.2 m of displacement occurs at depth during M 6. 8 events (Slemmons and Chung, 1982), calculated recurrences range from 120 to 300 years. Thus, in view of the time elapsed since the two previous events (123 and 155 years), we have entered the "earthquake window" for the Hayward fault. The new geologic rate has increased the estimates of 30 year probabilities for major events from 20% to 28% on the north half of the fault and from 20% to 23% on the southern half (compare WGCEP of 1988 and 1990).