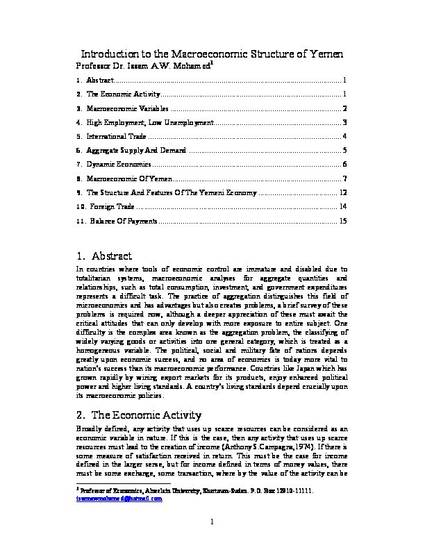 In countries where tools of economic control are immature and disabled due to totalitarian systems, macroeconomic analyses for aggregate quantities and relationships, such as total consumption, investment, and government expenditures represents a difficult task. The practice of aggregation distinguishes this field of microeconomics and has advantages but also creates problems, a brief survey of these problems is required now, although a deeper appreciation of these must await the critical attitudes that can only develop with more exposure to entire subject. One difficulty is the complex area known as the aggregation problem, the classifying of widely varying goods or activities into one general category, which is treated as a homogeneous variable. The political, social and military fate of nations depends greatly upon economic success, and no area of economics is today more vital to nation’s success than its macroeconomic performance. Countries like Japan which has grown rapidly by wining export markets for its products, enjoy enhanced political power and higher living standards. A country’s living standards depend crucially upon its macroeconomic policies.

Keywords
Disciplines
Publication Date
Comments
I am always fascinated by the Yemen as have deep respect for its history and people. My study in Japan brought me across the System Dynamics methods and its fabulous data generating conceptions. I introduced it to some of brilliant students who loved it. I verify that I am the author of this paper and have the legal right to deposit it here.
Citation Information
Professor Issam A.W. Mohamed. "Introduction to the Macroeconomic Structure of Yemen" Munich University Liberary, Germany (2010)
Available at: http://works.bepress.com/issamawmohamed/37/