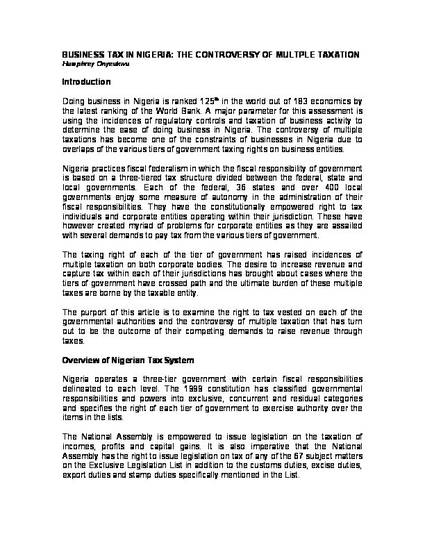 Doing business in Nigeria is ranked 125th in the world out of 183 economics by the latest ranking of the World Bank. A major parameter for this assessment is using the incidences of regulatory controls and taxation of business activity to determine the ease of doing business in Nigeria. The controversy of multiple taxations has become one of the constraints of businesses in Nigeria due to overlaps of the various tiers of government taxing rights on business entities.

Nigeria practices fiscal federalism in which the fiscal responsibility of government is based on a three-tiered tax structure divided between the federal, state and local governments. Each of the federal, 36 states and over 400 local governments enjoy some measure of autonomy in the administration of their fiscal responsibilities. They have the constitutionally empowered right to tax individuals and corporate entities operating within their jurisdiction. These have however created myriad of problems for corporate entities as they are assailed with several demands to pay tax from the various tiers of government.

The taxing right of each of the tier of government has raised incidences of multiple taxation on both corporate bodies. The desire to increase revenue and capture tax within each of their jurisdictions has brought about cases where the tiers of government have crossed path and the ultimate burden of these multiple taxes are borne by the taxable entity.

The purport of this article is to examine the right to tax vested on each of the governmental authorities and the controversy of multiple taxation that has turn out to be the outcome of their competing demands to raise revenue through taxes.