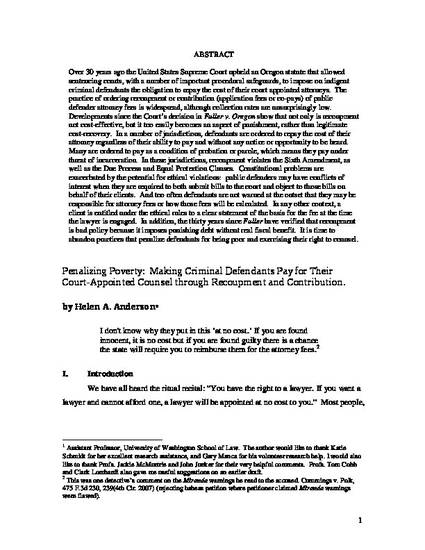 Over 30 years ago the United States Supreme Court upheld an Oregon statute that allowed sentencing courts, with a number of important procedural safeguards, to impose on indigent criminal defendants the obligation to repay the cost of their court appointed attorneys. The practice of ordering recoupment or contribution (application fees or co-pays) of public defender attorney fees is widespread, although collection rates are unsurprisingly low. Developments since the Court’s decision in Fuller v. Oregon show that not only is recoupment not cost-effective, but it too easily becomes an aspect of punishment, rather than legitimate cost-recovery. In a number of jurisdictions, defendants are ordered to repay the cost of their attorney regardless of their ability to pay and without any notice or opportunity to be heard. Many are ordered to pay as a condition of probation or parole, which means they pay under threat of incarceration. In these jurisdictions, recoupment violates the Sixth Amendment, as well as the Due Process and Equal Protection Clauses. Constitutional problems are exacerbated by the potential for ethical violations: public defenders may have conflicts of interest when they are required to both submit bills to the court and object to those bills on behalf of their clients. And too often defendants are not warned at the outset that they may be responsible for attorney fees or how those fees will be calculated. In any other context, a client is entitled under the ethical rules to a clear statement of the basis for the fee at the time the lawyer is engaged. In addition, the thirty years since Fuller have verified that recoupment is bad policy because it imposes punishing debt without real fiscal benefit. It is time to abandon practices that penalize defendants for being poor and exercising their right to counsel.