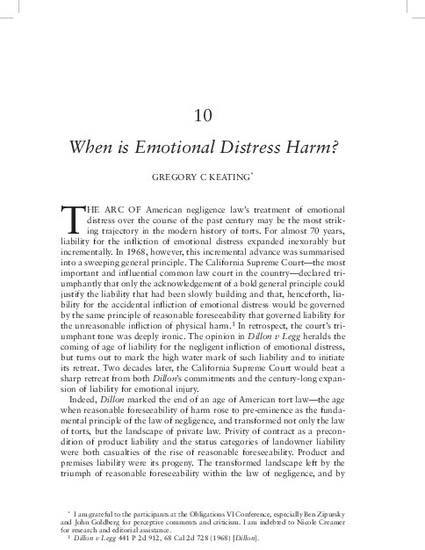 For the most part, courts have rested on the unsatisfying principle that liability must have some limit and pretty much any limit will do. The conventional wisdom is that this kind of arbitrary limitation is unavoidable. This chapter, prepared for the Obligations VII conference on Challenging Orthodoxy in Private Law, argues that progress may be made toward articulating principled boundaries for emotional injury by pursuing two paths. The first is taxonomical. NIED is about scope of liability; it is properly understood as a matter of proximate cause, not duty. The duty breached in Dillon v. Legg, for example, was the long-established duty to exercise reasonable care when driving an automobile. The question before the court was whether liability for breach of that duty extended to persons who foreseeably suffered severe emotional distress. What is true of this particular case is true generally: NIED does not ground new duties of care, it extends liability for breaches of preexisting, independently recognized, duties of care. This itself places boundaries on liability. The second path toward articulating principled boundaries on NIED liability is to inquire into the concept of harm and ask just when emotional distress counts as harm. Liability for negligence is, at its core, liability for physical harm and physical harm has long been understood in the law of negligence to mean physical impairment. Physical impairment, for its part, is impairment of normal physical capacities.

There is progress to be made in discrimination among instances of emotional distress by extending this idea of impairment to emotional injuries. Some emotional harms are impairments; to suffer them is to be left with impaired psychological capacities. Childhood sexual abuse, for example, characteristically leaves its victims with impaired capacities for trust. The death of one’s small child—the harm at issue in Dillon—is a harder case, but it seems intuitively correct to say that the death of a child often impairs the life of the parent in a profound way. Parents who witness the deaths of their children are often “never the same.” Part of the parent dies with the child, because the child’s life represents such a deep and irreplaceable investment of the parent’s agency. By asking when and why emotional suffering is not transient distress but enduring impairment it may be possible to make progress in limiting NIED liability in a principled, non-arbitrary manner.