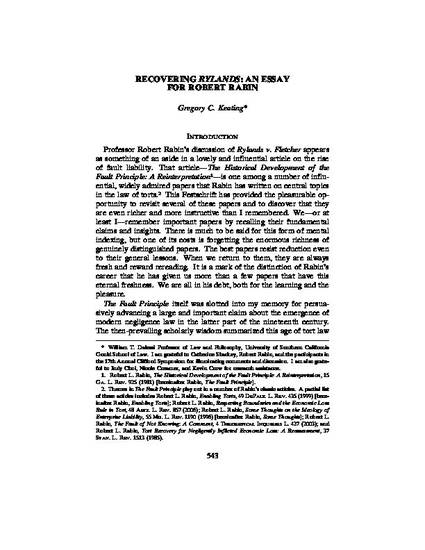 This paper, written for a Clifford Symposium Festschrift for Robert Rabin, comments on his lovely, widely admired, and yet still underappreciated paper The Historical Development of the Fault Principle: A Reinterpretation. Rabin’s paper teaches us something essential about the character and structure of modern tort law at the moment of its genesis, and it reminds us of the even more general truth that what the law does not cover is at least as important as what it does cover. The Historical Development of the Fault Principle is constructed around a simple, but powerful, distinction between fault as a breach of duty and fault as a cause of action. Negligence as a cause of action is an institution, a system of related rules, concepts, principles and policies. This simple but penetrating observation transforms the question of just what is at stake in the conventional thesis that the late nineteenth century was the heyday of “universal fault liability.” Whether or not fault liability was “universal” at the end of the nineteenth century turns, Rabin teaches, not on whether tort liability for accidental injury is constructed around fault or strict liability. The “universality” of fault liability is, rather, a question about the percentage of the legal landscape for unintentional harm that the institution of negligence liability governs. Building on this point, The Historical Development of the Fault Principle shows that the age of “universal fault liability” is better described as an age where “no duty” predominated. Tort liability – fault liability retreated whenever contract was capable of taking hold of a domain of accidental injury. It retreated both in the presence of contractual relations (in the workplace context) and in the absence of contractual relations (in the product context). Property, contract, and “no duty” all trumped tort. This insight not only changes our understanding of the rise of fault liability; it also provides a powerful rebuttal of the still influential, if waning, view that the common law of torts circa 1870-1905 was economically efficient. Rabin’s critique leaves intact the thesis that negligence liability itself emerged as a freestanding form of tort liability at the end of the nineteenth century. Prior to that time, negligence was merely the mental element of a number of discrete, nominate torts. Late in the nineteenth century, negligence transforms into a norm of conduct and thereby emerges as a distinctive form of tort liability. This development sets the stage for the expansion of fault liability into the domains of product accidents, landowner liability, and some forms of pure economic and emotional harm. The late nineteenth century thus sets the stage for the “universal fault liability” that it so conspicuously fails to achieve. Recovering Rylands argues that Rylands v. Fletcher represents a parallel development with respect to strict liability. Rylands generalizes ancient forms of liability in nuisance and trespass into a coherent, general alternative to fault liability. The opinions in the case both articulate strict liability as a general principle of responsibility for harm done and clarify the fundamental perception on which strict liability rests, namely, that harm justifiability inflicted – harm which is unavoidable in the sense that it should be inflicted – can trigger responsibilities of repair. The idea that the justified infliction of harm gives rise to responsibilities of repair stands in sharp contrast to the root premise of fault liability, and accounts for the enduring significance of strict liability as form of legal responsibility for harm done. After excavating the basis and nature of strict liability in Rylands, the paper traces the ebb and flow of the strand of strict liability that it inspired over the past century and a half. On the one hand, that history shows that fault liability is never universal, though generally dominant. On the other hand, that history suggests that the difficulty of attributing harms to activities without deploying a fault criterion may be a permanent, insurmountable barrier to universal, common law strict liability. Last, but surely not least, Rylands’ articulation of strict liability as a general idea is an essential part of the formative moment of modern tort law that Bob Rabin did so much to help us understand. Adding an account of Rylands is a way of building on his seminal contribution.