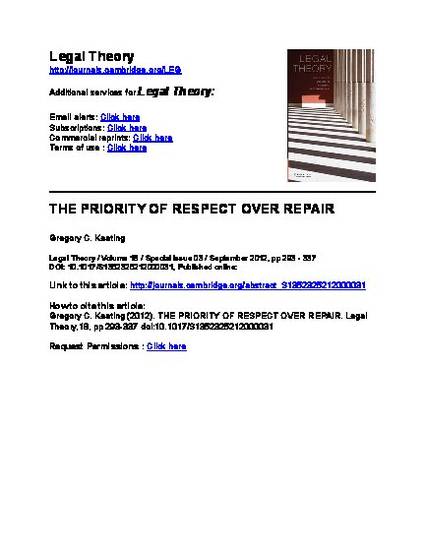 Contemporary tort theory is dominated by a debate between legal economists and corrective-justice theorists. Legal economists suppose that tortfeasors and tortious wrongs are false targets for cheapest cost-avoiders and avoidable future losses. Corrective-justice theorists argue powerfully that the economic account of tort as search for cheapest cost-avoiders with respect to future accidents does not capture the most fundamental fact about tort adjudication, namely, that the reason we hold defendants liable in tort is that they have wronged their victims and should therefore repair the harm they have done. Deterring cheapest cost-avoiders from committing future harms no more justifies imposing liability in tort than deterring future crime justifies hanging the innocent. This is a powerful critique of the economic theory of tort, but it overshoots the mark. As an account of tort law, corrective justice puts the cart before the horse Tort is a law of wrongs, not just a law of redress for wrongs. Repairing harm wrongly done is the next best way of complying with an obligation not to do harm wrongly in the first place. Rights and remedies form a unity in which rights have priority. Corrective justice is thus an essential but subordinate aspect of tort. This paper develops this line of criticism of corrective-justice theory and offers an alternative account of tort that places primary norms of harm avoidance and respect for rights at its center. On this conception, tort is — as the corrective-justice theorists rightly insist — a law of wrongs, but its distinctiveness lies in the content and character of the wrongs with which it is concerned. At its core, tort is concerned with protecting essential conditions of individual agency.