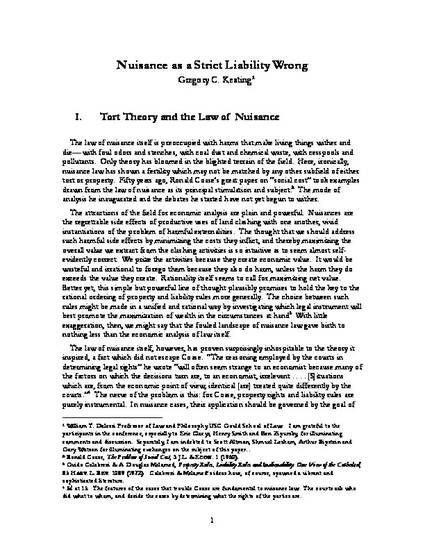 Nuisance law offers unrivaled instruction about the formal structure and substantive morality of strict liability in tort, and by so doing challenges the dominant theories of tort. On the one hand, the structure and substance of nuisance law do not conform to the economic thesis that tort is a law concerned with the efficient management of externalities. Nuisance law does indeed address harmful spillovers caused by the productive use of land but its governing aim in addressing those spillovers is to reconcile equal, but conflicting, rights. The right to the reasonable use and enjoyment of land is the touchstone of nuisance law and the primary concern of nuisance law is not the broad class of all externalities associated with the use of land, but a circumscribed class of harms that are also rights-violation. Nuisance law attempts to make equal – but conflicting – rights to the reasonable use and enjoyment compatible. Nuisance is a law of harms and rights, not costs and benefits, and it aims to reconcile competing claims fairly, not efficiently. On the other hand, the law of nuisance confounds the corrective justice conception of tort as a realm of conduct-based wrongs. Negligence liability is a conduct-based wrong par excellence; it predicates responsibility to repair on conduct which unjustifiably inflicts injury. Modern American nuisance law, however, is constructed around a distinction between unreasonable conduct and unreasonable harm, and it insists on reparation for harm justifiably done. Nuisance faults not the primary conduct responsible for doing harm, but a secondary failure to make reparation for harm reasonably done. Nuisance is a canonical “strict liability wrong” and strict liability is, in its most characteristic form, a conditional wrong whose essence lies in failing to volunteer reparation for harm justifiably done. Strict liability in nuisance supposes that an injurer does wrong when it fails to step forward and repair harm rightly inflicted. It is premised both on the principle of fairness that those who benefit from the infliction of harm should also shoulder its burdens, and on the perception that leaving the cost of such harm on the victims who suffer it is shows insufficient respect for the victims’ rights. Nuisance law has both a coherent overarching structure and tangled, elusive details. Much of this paper is therefore devoted to untangling those details. I try to show that impact – not conduct – is the essence of nuisance, and that the distinctiveness of the field as a form of liability in tort lies in its imposition of strict liability on justified, intentional conduct. The explication and reconstruction of nuisance law leads through a thicket of doctrines which construct nuisance as a realm of reciprocal right and mutual benefit and develop the distinction between unreasonable conduct and unreasonable harm. The paper then takes up perhaps the most important of modern American nuisance cases – Boomer v. Atlantic Cement. The great achievement of Boomer is to clarify the morality of both unreasonable conduct and unreasonable harm, thereby giving a clear representation of nuisance as a strict liability wrong. Boomer takes harmful conduct to be unreasonable when the harm inflicted might feasibly be avoided – when it might be eliminated without ending or crippling the activity responsible for its infliction. Reasonable harm, by contrast, is harm that should be inflicted; it is the unavoidable side effect of some productive use that we are not prepared to forego. Strict liability in Boomer is thus a morality of responsibility for unavoidable harm, a morality of responsibility for the harmful effects not of wrongful agency but of agency itself. Fairness, Boomer asserts, requires that unavoidable harm be borne by those who inflict it and reap its benefits. The last part of the paper argues that Boomer’s least appreciated lesson is a lesson about the significance of harm for the law of torts. Corrective justice theorists have stressed the importance of wrongful conduct for the law of torts, casting tort as a law of conduct-based wrong. They have been concomitantly uneasy with strict liability in tort, because strict liability is not predicated on wrongful conduct. Boomer illuminates the competing basis of strict liability in tort. In Boomer, it is the infliction of harm – the serious impairment of agency – not the infliction of harm through wrongful agency, that gives rise to responsibility and reparation. Strict liability challenges negligence because it insists that responsibility for harm done is not at an end when harm is justifiability done. Harm done to others is, in and of itself, a matter of moral concern and legal responsibility.