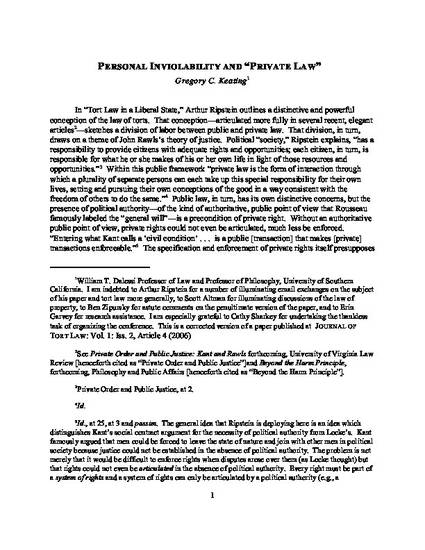 The “idea of private law” has occupied a prominent place in tort theorizing over the past twenty years. To American ears, the idea has a libertarian ring, implying a realm of private freedom beyond the reach of public power. But the idea of “private law” pursued in recent tort theory is different. This strand of tort theory takes an essentially formal view of “private law” as a type of adjudication through which one member of civil society invokes the public power of the state to call another member of civil society to account for breach of an obligation, owed by the latter to the former. In a number of recent, elegant essays, Arthur Ripstein has advanced a particular version of this view, a version distinguished in important part by its enlistment of the political philosophy of John Rawls in support of this project. Ripstein’s recent Tort Law in a Liberal State is a further contribution to this project, summarizing Professor Ripstein’s view and arguing for both the interpretive and the philosophical plausibility of his project.

Personal Inviolability and Private Law, JOURNAL OF TORT LAW: Vol. 1: Iss. 2, Article 4 (2006) raises objections to both aspects of Ripstein’s project, and briefly explains why “public law” conceptions of tort are at least as plausible as “private law” ones, both philosophically and interpretively. Interpretively, Professor Ripstein’s conception is open to three serious objections. First, by placing the calling of one member of civil society to account by another at the center of their view, “private law” theorists threaten to place the remedial cart before the substantive horse. Prior to the late nineteenth century, tort law had an intensely remedial cast and was not unified around general principles of liability. Our modern law of torts comes into existence with (and by the recognition of) tort as a freestanding law of primary obligation. By placing such great weight both on Kant’s property-centered account of private law and on “private law” theory’s heavily remedial conception of tort, Professor Ripstein’s conception cuts against the fundamental thrust of modern tort law. That thrust is to make obligation central and to treat right and remedy as separable. Ripstein, by contrast, places enormous weight on remedy and takes right and remedy to be indivisible.

Second, Tort Law in a Liberal State is, in important part, a brief for the fault principle. Professor Ripstein is right to distinguish between “harm-based” torts such as liability for accidental injury, negligently inflicted and “right-based” torts such as trespass, but wrong to claim that “harm-based” liability in tort is always fault-based. This claim leads Professor Ripstein both to a distorted account of tort law’s various strict liabilities and to a fundamental mischaracterization of much of the conduct subject to liability in tort. Professor Ripstein’s recasting of strict liabilities as fault ones commits him to the unfortunate idea that there is something intrinsically wrong with valuable, productive activities, blamelessly conducted. Both the recasting of particular strict liabilities in fault terms, and the righteous condemnation of risk to which this recasting leads, are mistaken. Rylands’ conduct in the famous case of Rylands v. Fletcher was not wrongful; Atlantic Cement’s conduct in Boomer was not wrongful; and Lake Erie’s conduct in Vincent was not wrongful. In all of these cases, defendant’s only “fault” lay in (unreasonably) failing to make reparation for harm (reasonably) inflicted. More generally and more importantly, risk, like pollution, is not wrongful in itself, and harm is a matter of moral concern even when it issues from blameless conduct. Strict liability is a morally significant and instructive form of liability because it registers the perception that serious harm must sometimes be repaired, even though it has been faultlessly inflicted.

Third and last, it is an interpretive mistake to insist that “public” and “private” forms of tort and accident law express fundamentally different values and moral conceptions. “Public law” schemes frequently complement or perfect “private law” ones, and threads of political morality tie private and public accident law institutions together. Zoning law’s relation to nuisance is only one of many cases in point.

Professor Ripstein’s philosophical claims are likewise open to objection. For starters, Professor Ripstein’s attachment to the form of “private law” transforms Kant’s preoccupation with the inviolability of persons into a preoccupation with the formal purity of legal institutions. This is a path to avoid. An accident law faithful to the power of Kant’s philosophy must give pride of place to the inviolability of our persons, not to the inviolability of our legal forms. That latter path leads to endowing legal rules with the intrinsic value held only by persons. Second, Ripstein’s assertion that Rawls’ theory of justice commits him to the particular institutional form of “private law” is unpersuasive. Famously and explicitly, Rawls’ theory leaves open the choice between capitalism and market socialism. The most natural and plausible reading of his theory of justice shows that it also leaves open the far more modest institutional choice between “private” and “public” law institutions. Equal freedom and reciprocity of right among free and equal citizens does not require the particular institutional form that goes by the name of “private law.”

The final part of Personal Inviolability and “Private Law” briefly suggests that some form of enterprise liability constructed around a conception of commutative justice may, in fact, express the independence, equality and inviolability of democratic citizens more adequately than a “private law” constructed around a conception of corrective justice. As far as the law of accidents is concerned, the choice of appropriate institutional form depends as much on the properties of the social world in which accidents arise as it does on the formal characteristics of the available legal institutions. In our characteristically modern social world—where the costs of accidents can be dispersed across the activities responsible for them—“public” law forms of accident law may do a better job than “private” law ones of securing justice among free and equal persons. Free and equal citizens have ample reason not to place their rights against one another at the mercy of a “private law” negligence lottery, and to seek surer reparation for serious injury through some form of enterprise liability.