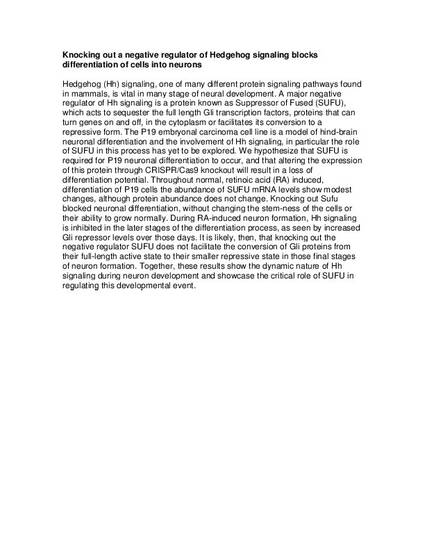 Hedgehog (Hh) signaling, one of many different protein signaling pathways found in mammals, is vital in many stage of neural development. A major negative regulator of Hh signaling is a protein known as Suppressor of Fused (SUFU), which acts to sequester the full length Gli transcription factors, proteins that can turn genes on and off, in the cytoplasm or facilitates its conversion to a repressive form. The P19 embryonal carcinoma cell line is a model of hind-brain neuronal differentiation and the involvement of Hh signaling, in particular the role of SUFU in this process has yet to be explored. We hypothesize that SUFU is required for P19 neuronal differentiation to occur, and that altering the expression of this protein through CRISPR/Cas9 knockout will result in a loss of differentiation potential. Throughout normal, retinoic acid (RA) induced, differentiation of P19 cells the abundance of SUFU mRNA levels show modest changes, although protein abundance does not change. Knocking out Sufu blocked neuronal differentiation, without changing the stem-ness of the cells or their ability to grow normally. During RA-induced neuron formation, Hh signaling is inhibited in the later stages of the differentiation process, as seen by increased Gli repressor levels over those days. It is likely, then, that knocking out the negative regulator SUFU does not facilitate the conversion of Gli proteins from their full-length active state to their smaller repressive state in those final stages of neuron formation. Together these results show the dynamic nature of Hh signaling during neuron development and showcase the critical role of SUFU in regulating this developmental event.