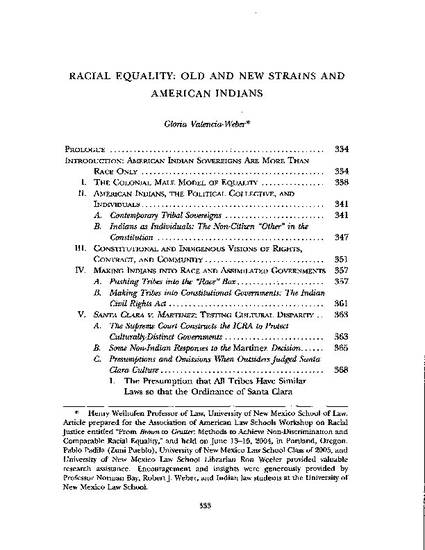 First, I will set the colonial context for equality that was anchored in a narrow white male model as the principal civic actor. Second, the discussion proceeds to the political status of American Indians, the basis for the nation-to-nation relations that secured in treaties the lands and resources that benefited non-Indians. Third, this Article explores the cultural difference between indigenous and constitutional visions of individual rights and community. Fourth, is a description of the efforts to remake Indians into a race and assimilate their governments into federalism. Fifth, this Article discusses the Santa Clara Pueblo v. Martinez case, which demonstrates the cultural disparity between the individual rights model of the ICRA and the political right of the tribe to self-determination. The conclusion affirms that the retained power of tribal sovereigns for self-governance and self-determination is the most important right for American Indians. Though American Indians are now citizens entitled to equal protection and due process, this individualistic theory is limited in force to protect culturally distinct governments built on values of consensual relations.