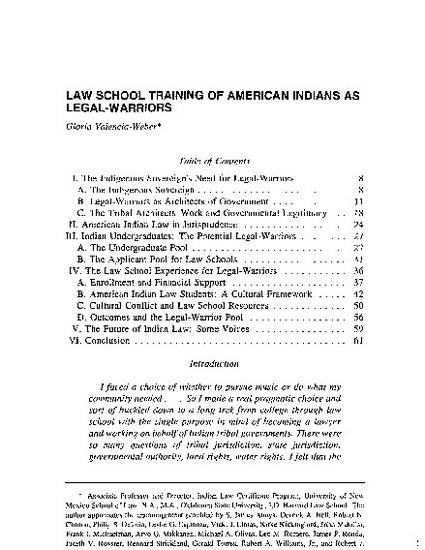 This article explores four areas involved in training lawyers appropriate to the needs of tribal nations. First, the American Indian tribes, as the indigenous sovereigns, present legal needs and opportunities unique from other minority groups. Development of Indian law depends on the exercise of sovereign power by the Indian nations, not constitutional equal protection of an ethnic minority. The architectural work of developing the governments, i.e., creating tribal law and operating tribal courts, calls for the legal-warrior's critical ability to meld customary perspectives with knowledge and skills acquired in legal professional training. Second, the specialty of American Indian law as jurisprudence is affected by the training opportunities for American Indians in law schools. Specialists in American Indian law are important, regardless of their ethnic identity. Only American Indian individuals, however, can have the dual identity of indigenous community members and of practicing attorneys. Legal-warriors are cultural as well as legal advocates. Legal-warriors are necessary if Indian law, especially the federal law, is to be "decolonized." Decolonization requires the challenging of doctrines with disabling effects upon native peoples, such as the plenary power doctrine. Decolonization also requires that American Indians speak for themselves, reversing the history of outside advocates speaking for Indians instead of acting as collaborators with American Indian attorneys. The third area explored in this article is the limited pool of potential legal-warriors. The population of American Indian students who enter and complete undergraduate education is small. The negative impact on the admission to law schools, other professions, and graduate studies handicaps the tribal nations. Fourth, the small body of American Indians who enter and complete law school reveal the emerging pool of legal-warriors. One cannot assume or prescribe that all or most American Indian attorneys will specialize in Indian law; specialization is an individual's career choice. However, the law school experience, the financial and curricular resources devoted to American Indian needs, and the outcomes for American Indians who graduate from law school greatly determine whether an American Indian can become a legal-warrior. If law schools are to produce legal-warriors, then the institutions must affirmatively embrace major changes in their curriculum and environment for legal training. This legal-warrior (instead of yet another generic lawyer) is a necessary contemporary response to the increasing needs of the tribal sovereigns.