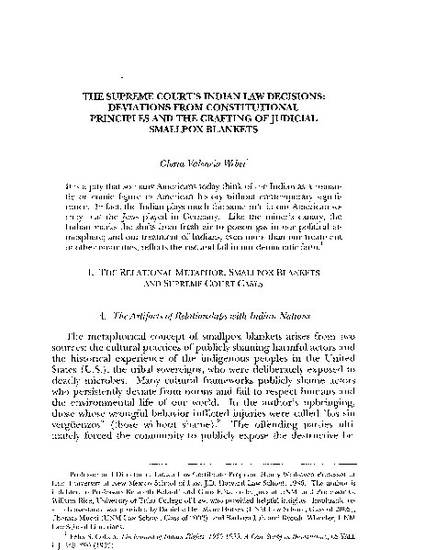 The first section discusses sovereignty and the sources for foundational principles that pertain to the relationships among tribes, the states, and the federal government. The sources are the documented discourse and covenants of the constitutional evolution, the Articles of Confederation and Perpetual Union (Articles), and the Constitution of 1787 as they developed state jurisdiction related to Indian matters. Second, the paper discusses the colonial period and reality versus the fictions or myths of discovery and conquest. Third, the paper covers the conflict and unity in the pre-Revolutionary period. Fourth, the paper considers the Articles as the first U.S. model to exclude the states from relations with the tribes. Fifth is a review of how the federal government implemented the foundational principle to exclude the states. Sixth is a discussion on the addition of "states' inherent jurisdiction on reservations" as the latest undisclosed and destructive judicial microbe in the Supreme Court's Indian law decisions. The conclusion advocates educating the Court and citizens about the role of the indigenous nations in the constitutional development.