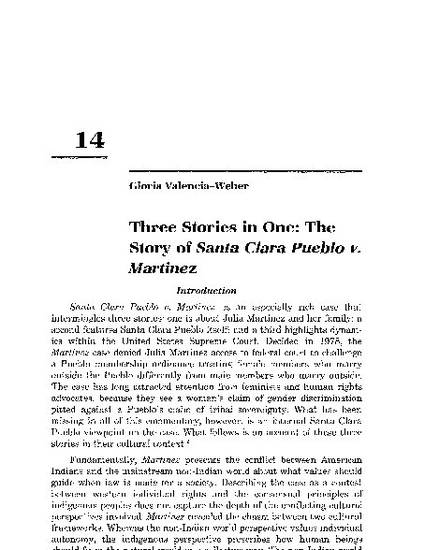 Santa Clara Pueblo v. Martinez' is an especially rich case that intermingles three stories: one is about Julia Martinez and her family; a second features Santa Clara Pueblo itself; and a third highlights dynamics within the United States Supreme Court. Decided in 1978, the Martinez case denied Julia Martinez access to federal court to challenge a Pueblo membership ordinance treating female members who marry outside the Pueblo differently from male members who marry outside. The case has long attracted attention from feminists and human rights advocates, because they see a woman's claim of gender discrimination pitted against a Pueblo's claim of tribal sovereignty. What has been missing in all of this commentary, however, is an internal Santa Clara Pueblo viewpoint on the case. What follows is an account of these three stories in their cultural context.