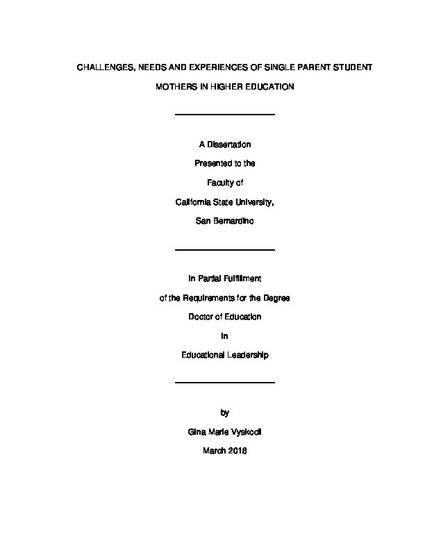 While the literature addressing the experiences of women in higher education is expanding, the experiences of single mothers in academia remains under-explored, despite single student mothers being the largest and fastest growing student demographic in higher education institutions. The role of single mothers who are pursuing degrees while raising children assumes crucial importance in helping forge means of support that are not government-dependent, as well as enabling single parent student mothers to role model educational pursuits and achievement of degrees as possibilities for dependents. Though college degrees can provide means of financial stability and immense social and professional benefits for sole provider single–parent homes, higher education can prove significantly detrimental to the quality of parenting single parent students provide dependent children, and can negatively impact personal health, financial and economic security, and interpersonal relationships from undertaking multiplicity of roles.

This study seeks to understand the challenges, needs and experiences which occur at the intersection of parenthood and studenthood for single parent student mothers, as well as exploring ideologies of what it means to be a “good parent” or “good student.” It also inquires into student mothers’ perceptions of institutional support, which may impact matriculation or attrition and seeks to ascertain whether existing college policies need to be restructured to better support the degree-seeking endeavors of single parent student mothers.

Results revealed that nearly all respondents were forced on some occasions to choose between attendance at school and family events and being present at moments which would ensure optimal outcomes in both categories of competing identities. Conflict was experienced by respondents when student mothers were forced to shift into and out of various roles and identities which made it difficult for student parents to maximize performance in any central area of personal or professional achievement. Finally, student mothers’ discourses indicated they perceived others’ perceptions of their in-class performance, class standing, and professional trajectory of their achievement suffered when a forced choice situation resulted in their absence or tardy in a course, or inability to participate in a group class activity. Student mothers revealed through their narratives instructors who shamed them in front of classmates for having to bring a child to class, or castigated them for bringing a child to an inappropriate forum in which content was not perceived as child-suitable. Student mother narratives revealed resentment regarding being exhorted to choose between being a parent and being a student, when, in their opinions, they were forced to undertake both roles concurrently, without sufficient support to engage in either role.

A key deficit identified in the narratives of student mothers was their perceived absence of institutional support which would enable them to achieve their educational goals and better provide for their families. Student parent narratives indicated struggles with concern about debt following graduation, and discourse revealed speculation regarding possible forced choices at some point in the future, if debt loads were too high to be supported by income, job insufficiency was experienced, or cost of living was too high to support both debt and living expenses.