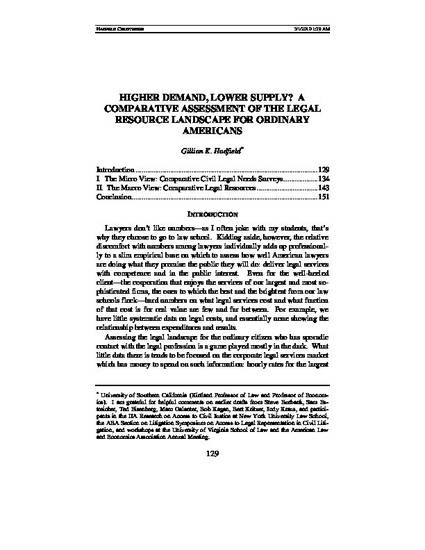 In this paper I review the small amount of available data on the extent to which ordinary individuals in the U.S. have access to legal resources to navigate the law-thick world that Robert Kagan has famously called ‘adversarial legalism—the American way of law.’ I present this data in comparative context, relating what (little) we know about the availability of law in the U.S. to what (little) we know about the availability of law in other advanced societies and in countries transitioning to legally-mediated market democracy. I review first a set of ‘legal needs’ surveys that ask households about their experiences with difficult problems that are potentially subject to legal intervention or governance and their use of resources, including lawyers, to resolve those problems. The comparative analysis demonstrates that while the incidence of reported problems is relatively stable across countries (with the exception of Japan, which reports lower rates),and contact with lawyers is comparable, there are significant differences in the extent to which people in other countries are able to access other non-lawyer resources for help with a legal problem. Most strikingly, Americans appear significantly more likely to ‘lump’ their problems and do nothing as compared to people in other countries with arguably more robust delivery systems to provide individuals with access to legal resolutions. I then turn to macro indicators to shed light on the extent to which a country devotes resources to delivering the legal system in practice. Here I compare data on expenditure on courts and legal aid and numbers of judges, lawyers and cases in a set of European countries to the available US data. Here too we see that other countries, including those with still emerging legal systems, appear to expend considerably more resources than the US does on a per case. Together these ‘tidbits’ of data, which call for more careful empirical work, are suggestive of the conclusion that while the US system ostensibly relies heavily on law to mediate relationships among people and institutions, in practice there are few resources devoted to making law effective in practice, and apparently less so than in countries that are arguably less law-driven than our own.