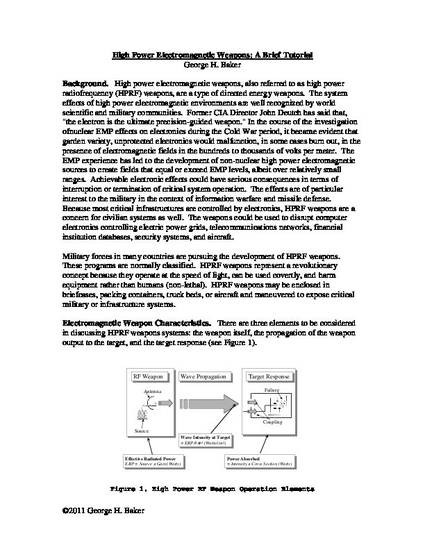 High power electromagnetic weapons, also referred to as high power radiofrequency (HPRF) weapons, are a type of directed energy weapons. The system effects of high power electromagnetic environments are well recognized by world scientific and military communities. Former CIA Director John Deutch has said that, "the electron is the ultimate precision-guided weapon." In the course of the investigation ofnuclear EMP effects on electronics during the Cold War period, it became evident that garden variety, unprotected electronics would malfunction, in some cases burn out, in the presence of electromagnetic fields in the hundreds to thousands of volts per meter. The EMP experience has led to the development of non-nuclear high power electromagnetic sources to create fields that equal or exceed EMP levels, albeit over relatively small ranges. Achievable electronic effects could have serious consequences in terms of interruption or termination of critical system operation. The effects are of particular interest to the military in the context of information warfare and missile defense. Because most critical infrastructures are controlled by electronics, HPRF weapons are a concern for civilian systems as well. The weapons could be used to disrupt computer electronics controlling electric power grids, telecommunications networks, financial institution databases, security systems, and aircraft. The article provides a brief introduction to HPRF sources, environments, effects and protection.