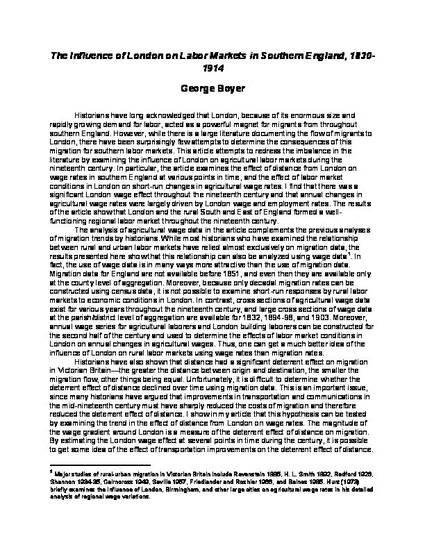 Article
The Influence of London on Labor Markets in Southern England, 1830-1914
Articles and Chapters
Download
Publication Date
Disciplines
Abstract
[Excerpt] Historians have long acknowledged that London, because of its enormous size and rapidly growing demand for labor, acted as a powerful magnet for migrants from throughout southern England. However, while there is a large literature documenting the flow of migrants to London, there have been surprisingly few attempts to determine the consequences of this migration for southern labor markets. This article attempts to redress the imbalance in the literature by examining the influence of London on agricultural labor markets during the nineteenth century. In particular, the article examines the effect of distance from London on wage rates in southern England at various points in time, and the effect of labor market conditions in London on short-run changes in agricultural wage rates. I find that there was a significant London wage effect throughout the nineteenth century and that annual changes in agricultural wage rates were largely driven by London wage and employment rates. The results of the article show that London and the rural South and East of England formed a well-functioning regional labor market throughout the nineteenth century.
Comments