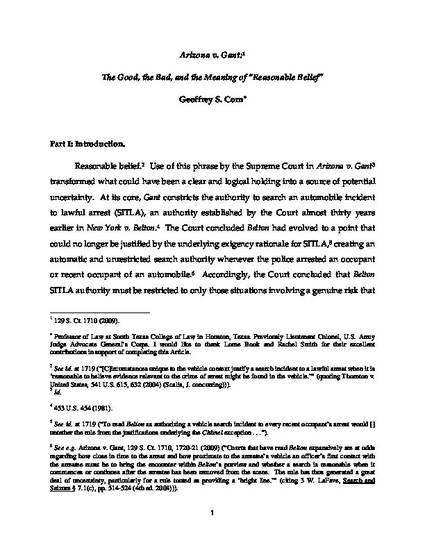 Reasonable belief. Use of this phrase by the Supreme Court in Arizona v. Gant transformed what could have been a clear and logical holding into a source of potential uncertainty. At its core, Gant constricts the authority to search an automobile incident to lawful arrest (SITLA), an authority established by the Court almost thirty years earlier in New York v. Belton. The Court concluded Belton had evolved to a point that could no longer be justified by the underlying exigency rationale for SITLA, creating an automatic and unrestricted search authority whenever the police arrested an occupant or recent occupant of an automobile. Accordingly, the Court concluded that Belton SITLA authority must be restricted to only those situations involving a genuine risk that the arrestee could gain access to the passenger compartment of the automobile immediately after arrest, with that authority expiring once the arrestee is secured in a manner that deprives her of any meaningful access to the automobile.

Had the Court’s analysis been limited to defining the constriction of Belton’s SITLA authority, little uncertainty would have been produced: once an arrestee was effectively secured, some alternate existing exception to the warrant and probable cause requirements of the Fourth Amendment would then control the reasonableness of all other intrusions into the arrestee’s automobile. The Court, however, did not limit its analysis to this continuum. Instead, writing for the majority, Justice Stevens introduced an apparently new standard—inspired by Justice Scalia’s concurrence in Thornton v. United States —to justify a search of an automobile: “we also conclude that circumstances unique to the automobile context justify a search incident to arrest when it is reasonable to believe that evidence of the offense of arrest might be found in the vehicle.” Until Gant, no such reasonable belief test for assessing a reasonable search existed in Fourth Amendment jurisprudence. Instead, a two-prong equation had become settled law: a full evidentiary search is reasonable only when supported by probable cause; a cursory protective inspection is reasonable on a lower quantum of reasonable suspicion.

This article highlights why interpreting ‘reasonable belief’ as a new quantum of proof that renders the search of an automobile reasonable is palpably hostile to the most fundamental principle of search law: pure evidentiary searches may only be reasonable when based on probable cause. Rather, a ‘reasonable belief’ that evidence related to the arrest may be in the automobile operates as a procedural tether, linking the probable cause for the arrest to the search for that evidence. Accordingly, reasonable belief within the meaning of Gant is distinct both from the traditional authority granted by a search incident to a lawful arrest (SITLA) and the authority granted by probable cause and, therefore, has a completely different scope of applicability. Finally, viewing the Court’s decision in Gant as a procedural tether – albeit one with necessary substantive overtones – is neither the hindrance to police procedure nor the detriment to the public good that it might appear to be at first glance.