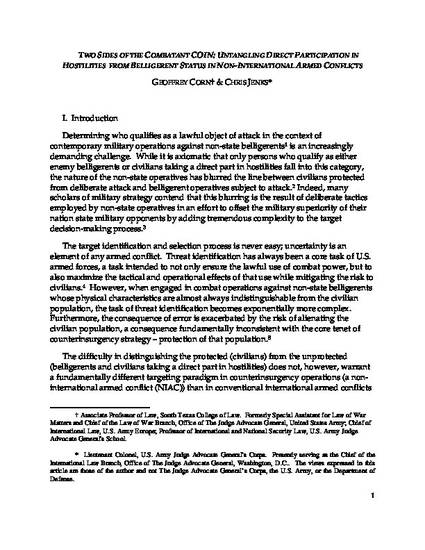 Determining who qualifies as a lawful object of attack in contemporary military operations against non-state belligerents is an increasingly demanding challenge. While it is axiomatic that only persons who qualify as either belligerents or civilians taking a direct part in hostilities fall into this category, the nature, and indeed goal, of counter-insurgencies blurs the line between civilians protected from deliberate attack and belligerents subject to attack.

This article rejects the increasing trend to treat all non-state actors as merely a conglomeration of civilians who take a direct part in hostilities, an approach which incentivizes non-compliance with the law of armed conflict (LOAC) and, perversely, dilutes civilian protection. Instead, this article argues that all belligerent operatives – those involved in not just IAC but also the more prevalent NIAC – are subject to status based targeting authority and the application of deadly force in the first instance.

This flawed trend appears to be the result of the combined effect of the lack of an explicit definition of a combatant in NIAC, and misapplication of the International Committee of the Red Cross’ (ICRC) endorsement of the concept of “continuous combat function” (CCF) as a means of establishing direct participation in hostilities and corresponding loss of civilian protection from attack. The effect of the CCF concept has made it more convenient to analyze the legality of attacking non-state actors through the DPH methodology than to assess whether such actors fall into a category of presumptively targetable belligerents subject to attack no differently than their IAC counterparts. The article offers a proposal of how to reconcile the ICRC’s view with status based targeting presumptions: maintain the distinction integrity.

The article begins by discussing the LOAC’s categorization of civilians and belligerents (combatants in IAC), and how a lack of an explicit treaty definition of combatant in the NIAC context is an obstacle to acknowledging analogous categorization. The article then explores organizational membership and how subordination to command and control is the fundamental difference between belligerents and civilians in any armed conflict. The article next explains the difference between status and conduct based targeting and why a focus on conduct to assess belligerent status is merely a permutation of traditional status recognition analysis.

The article then contrasts that approach by examining why the use of conduct undermines the extension of the ICRC’s rule to define enemy belligerent forces. These problems result in the ICRC’s arguably schizophrenic imposition of a minimum force requirement even when targeting those engaged in CCF. As the article details, the utility of CCF is not in assessing which civilians are taking a direct part in hostilities, but in determining when an individual appearing to be a civilian is in fact a belligerent operative of an armed organized group.

Ultimately, the integrity of the target legality framework depends on the recognition of opposing belligerent groups in any armed conflict. This recognition facilitates implementation of the principle of distinction by allowing belligerent forces to segregate those they encounter into two distinct groups: those presumed hostile and therefore subject to immediate attack, and all others (civilians) presumed non-hostile and therefore protected from immediate attack. Neither of these presumptions is absolute; both may be rebutted based on the nature of the interaction with friendly forces. However, these presumptions add a modicum of clarity to an increasingly uncertain operational environment, clarity derived from the very nature of armed conflict and essential to protect both civilians and belligerents from the effects of overzealous or unjustifiably hesitant targeting authority