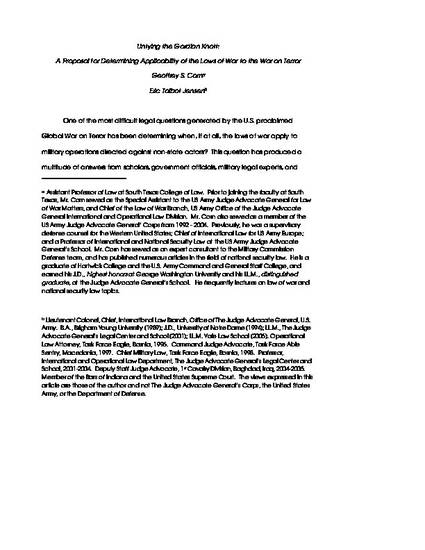 Unpublished Paper
Untying the Gordian Knott: A Proposal for Determining Applicability of the Laws of War to the War on Terror
ExpressO (2008)
Download
Abstract

One of the most difficult legal questions generated by the U.S. proclaimed Global War on Terror has been determining when, if at all, the laws of war apply to military operations directed against nonstate actors? This question has produced a multitude of answers from scholars, government officials, military legal experts, and even the Supreme Court of the United States. The only aspect of this question that would likely generate consensus among these diverse viewpoints is that the difficulty of applying a state-centric law triggering paradigm to a dispute that defies state-centric classification has created tremendous legal uncertainty.

While from a lay perspective it may seem that resolving such a question is like "dancing on the head of a needle", the resolution has profound consequences for virtually every person involved or impacted by this "war". Since the time of the U.S. military response to the attacks of 9.11, the executive branch has struggled to articulate, and in many judicial challenges defend, how it could invoke the authorities of war without accepting the obligations of the law regulating war. Responding to such questions by application of the traditional law-triggering paradigm was like fitting a square peg into a round hole. Because of this, the time has come to develop a new approach to determining application of the laws of war that reconciles this disparity between authority and obligation related to the conduct of combat military operations. This will require adopting a new triggering "criteria". This trigger must reflect both the underlying purpose of the laws of war, but also the pragmatic realities of contemporary military operation.

It is the thesis of this article that a nation's assignment of status based ROE to its military should constitute the trigger requiring that nation and its military to apply the laws of war to that military operation. As nations prepare to use military force, national leaders dictate rules on how the military should use military force in the impending operation. These rules, broadly categorized as Rules of Engagement (ROE),fall into two general categories: conduct based ROE which allow military personnel to respond with force based on an individual's actions,11 and status based ROE which allow military personnel to use deadly force based only on an individual's membership in a designated organization, regardless of their conduct.

This article will initially discuss the historical underlying purpose of regulating conflict, and why that purpose supports an expansive application of the laws of war. It will then explain why the current law-triggering test is insufficient to respond to the realities of contemporary transnational conflict between states and non-state organizations. The article will then provide a comprehensive discussion of the concept of rules of engagement, to include how they evolved to compliment application of the laws of war. More importantly, the article will explain how in practice rules of engagement fall into two broad categories: status or conduct rules. The distinction between these two categories of ROE will, as this article demonstrates, offer a new analytical criterion for triggering the law which relies on a nation's invocation of status based ROE. The article will accordingly analyze how focus on the rules of engagement related to military operations offers perhaps the best de facto indicator of the line between conflict and non-conflict operations, and therefore is the best triggering criterion for legally mandated application of the fundamental principles of the laws of war. The article will conclude with a proposal for adoption of this new law triggering paradigm, and a discussion of some pragmatic policy concerns that will need to be carefully considered in any such adoption.

Disciplines
Publication Date
Citation Information
Geoffrey S. Corn and Eric T. Jensen. "Untying the Gordian Knott: A Proposal for Determining Applicability of the Laws of War to the War on Terror" ExpressO (2008)
Available at: http://works.bepress.com/geoffrey_corn/2/