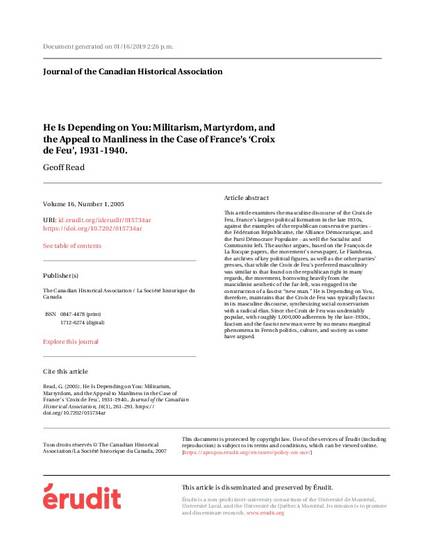 Article
He Is Depending on You: Militarism, Martyrdom, and the Appeal to Manliness in the Case of France’s ‘Croix de Feu’, 1931-1940.
Journal of the Canadian Historical Association
Download Find in your library
Document Type
Article
Publication Date
URL with Digital Object Identifier
10.7202/015734ar
Disciplines
Abstract

This article examines the masculine discourse of the Croix de Feu, France’s largest political formation in the late 1930s, against the examples of the republican conservative parties – the Fédération Républicaine, the Alliance Démocratique, and the Parti Démocrate Populaire – as well the Socialist and Communist left. The author argues, based on the François de La Rocque papers, the movement’s newspaper, Le Flambeau, the archives of key political figures, as well as the other parties’ presses, that while the Croix de Feu’s preferred masculinity was similar to that found on the republican right in many regards, the movement, borrowing heavily from the masculinist aesthetic of the far-left, was engaged in the construction of a fascist “new man.” He is Depending on You, therefore, maintains that the Croix de Feu was typically fascist in its masculine discourse, synthesizing social conservatism with a radical élan. Since the Croix de Feu was undeniably popular, with roughly 1,000,000 adherents by the late-1930s, fascism and the fascist new man were by no means marginal phenomena in French politics, culture, and society as some have argued.