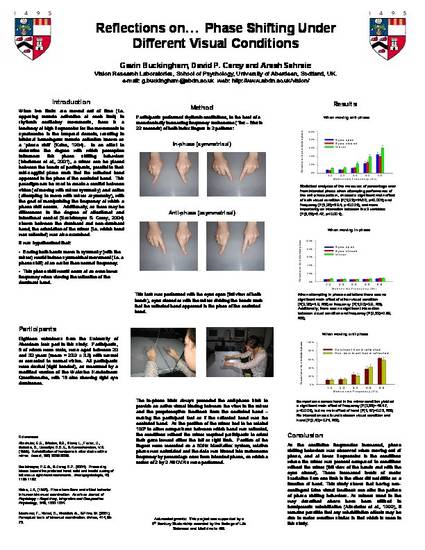 When two limbs are moved out of time (i.e. opposing muscle activation at each limb) in rhythmic oscillatory movements, there is a tendency at high frequencies for the movements to synchronise in the temporal domain, resulting in bilateral homologous muscle activation known as a ‘phase shift’ (Kelso, 1984). In an effort to determine the degree with which perception influences this phase shifting behaviour (Mechsner et al., 2001), a mirror can be placed between the hands of participants, parallel to their mid-saggital plane such that the reflected hand appeared in the place of the occluded hand. This paradigm can be used to create a conflict between vision (of moving with mirror symmetry) and action (attempting to move with mirror asymmetry), with the goal of manipulating the frequency at which a phase shift occurs. Additionally, as there may be differences in the degree of attentional and intentional control (Bestelmeyer & Carey, 2004) shown between the dominant and non-dominant hand, the orientation of the mirror (i.e. which hand was reflected) was also examined.