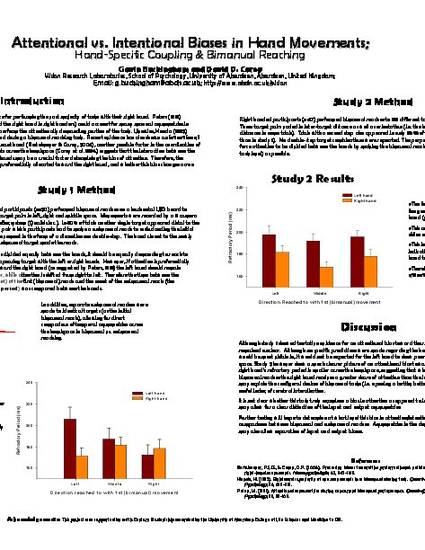 Most of the population is dextral, showing a clear preference for performing the vast majority of tasks with their right hand. Peters (1981) suggested that an asymmetrical bias in attention (toward the right hand in right handers) could account for many manual asymmetries in bimanual task performance, with the left hand unable to perform the attentionally demanding portion of the task. Likewise, Honda (1982) demonstrated preferential monitoring of the dominant hand during a bimanual reaching task. Recent evidence has also shown an intentional (i.e. output related motor attention) bias toward the dominant hand (Bestelmeyer & Carey, 2004), another possible factor in the coordination of the hands. Evidence of unimanual performance decrements across the hemispace (Carey et al. 1996) suggests that the interaction between the side of space reached to and the temporal coupling of the hands may be a crucial factor determining the bias of attention. Therefore, the purpose of the current study is to investigate if attention is preferentially allocated toward the right hand, and whether this bias changes across the hemispace.