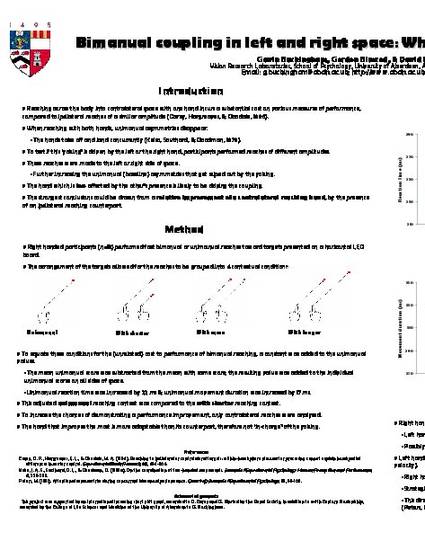 • Reaching across the body into contralateral space with one hand incurs a substantial cost on various measures of performance, compared to ipsilateral reaches of a similar amplitude (Carey, Hargreaves, & Goodale, 1996).

• When reaching with both hands, unimanual asymmetries disappear.

-The hands take off and land concurrently (Kelso, Southard, & Goodman, 1979).

• To test if this ‘yoking’ is driven by the left or the right hand, participants performed reaches of different amplitudes.

• These reaches were made to the left or right side of space.

-Further increasing the unimanual (baseline) asymmetries that get wiped out by the yoking.

• The hand which is less affected by the other’s presence is likely to be driving the coupling.