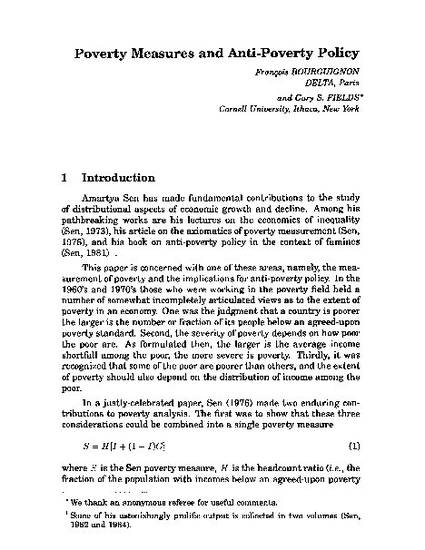 [Excerpt] Amartya Sen has made fundamental contributions to the study of distributional aspects of economic growth and decline. Among his pathbreaking works are his lectures on the economics of inequality (Sen, 1973), his article on the axiomatics of poverty measurement (Sen, 1976), and his book on anti-poverty policy in the context of famines (Sen, 1981).

This paper is concerned with one of these areas, namely, the measurement of poverty and the implications for anti-poverty policy. In the 1960's and 1970's those who were working in the poverty field held a number of somewhat incompletely articulated views as to the extent of poverty in an economy. One was the judgment that a country is poorer the larger is the number or fraction of its people below an agreed-upon poverty standard. Second, the severity of poverty depends on how poor the poor are. As formulated then, the larger is the average income shortfall among the poor, the more severe is poverty. Thirdly, it was recognized that some of the poor are poorer than others, and the extent of poverty should also depend on the distribution of income among the poor.