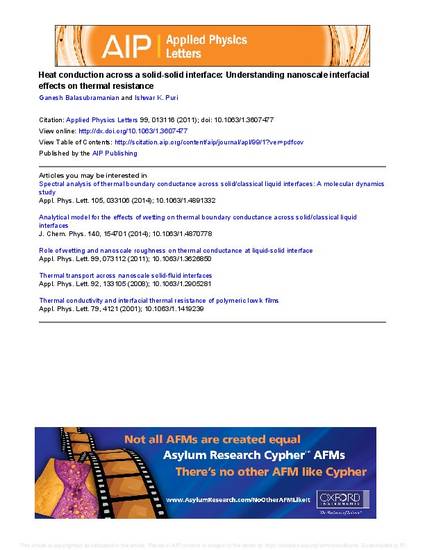 Phonons scatter and travel ballistically in systems smaller than the phonon mean free path. At larger lengths, the transport is instead predominantly diffusive. We employ molecular dynamics simulations to describe the length dependence of the thermal conductivity. The simulations show that the interfacial thermal resistance Rk for a Si-Ge superlattice is inversely proportional to its length, but reaches a constant value as the system dimension becomes larger than the phonon mean free path. This nanoscale effect is incorporated into an accurate continuum model by treating the interface as a distinct material with an effective thermal resistance equal to Rk .

Keywords
Disciplines
Publication Date
Publisher Statement
The following article appeared in Applied Physics Letters 99, 013116 (2011); and may be found at, doi: 10.1063/1.3607477. Copyright 2011 American Institute of Physics. This article may be downloaded for personal use only. Any other use requires prior permission of the author and the American Institute of Physics.
Citation Information
Ganesh Balasubramanian and Ishwar K. Puri. "Heat conduction across a solid-solid interface: Understanding nanoscale interfacial effects on thermal resistance" Applied Physics Letters Vol. 99 Iss. 013116 (2011)
Available at: http://works.bepress.com/ganesh_balasubramanian/4/