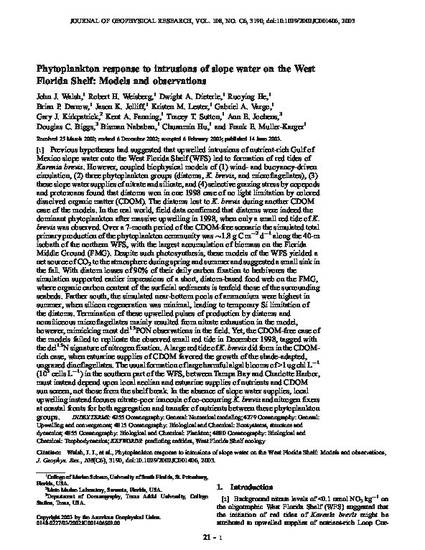 Previous hypotheses had suggested that upwelled intrusions of nutrient‐rich Gulf of Mexico slope water onto the West Florida Shelf (WFS) led to formation of red tides of Karenia brevis. However, coupled biophysical models of (1) wind‐ and buoyancy‐driven circulation, (2) three phytoplankton groups (diatoms, K. brevis, and microflagellates), (3) these slope water supplies of nitrate and silicate, and (4) selective grazing stress by copepods and protozoans found that diatoms won in one 1998 case of no light limitation by colored dissolved organic matter (CDOM). The diatoms lost to K. brevis during another CDOM case of the models. In the real world, field data confirmed that diatoms were indeed the dominant phytoplankton after massive upwelling in 1998, when only a small red tide of K. brevis was observed. Over a 7‐month period of the CDOM‐free scenario the simulated total primary production of the phytoplankton community was ∼1.8 g C m−2 d−1 along the 40‐m isobath of the northern WFS, with the largest accumulation of biomass on the Florida Middle Ground (FMG). Despite such photosynthesis, these models of the WFS yielded a net source of CO2 to the atmosphere during spring and summer and suggested a small sink in the fall. With diatom losses of 90% of their daily carbon fixation to herbivores the simulation supported earlier impressions of a short, diatom‐based food web on the FMG, where organic carbon content of the surficial sediments is tenfold those of the surrounding seabeds. Farther south, the simulated near‐bottom pools of ammonium were highest in summer, when silicon regeneration was minimal, leading to temporary Si limitation of the diatoms. Termination of these upwelled pulses of production by diatoms and nonsiliceous microflagellates mainly resulted from nitrate exhaustion in the model, however, mimicking most del15PON observations in the field. Yet, the CDOM‐free case of the models failed to replicate the observed small red tide in December 1998, tagged with the del15N signature of nitrogen fixation. A large red tide of K. brevis did form in the CDOM‐rich case, when estuarine supplies of CDOM favored the growth of the shade‐adapted, ungrazed dinoflagellates. The usual formation of large harmful algal blooms of > 1 ug chl L−1 (105 cells L−1) in the southern part of the WFS, between Tampa Bay and Charlotte Harbor, must instead depend upon local aeolian and estuarine supplies of nutrients and CDOM sun screen, not those from the shelf break. In the absence of slope water supplies, local upwelling instead focuses nitrate‐poor innocula of co‐occurring K. brevis and nitrogen fixers at coastal fronts for both aggregation and transfer of nutrients between these phytoplankton groups.

Copyright 2003 by the American Geophysical Union.