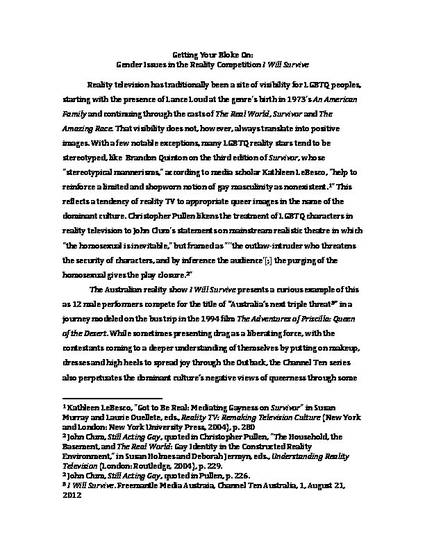 Presentation
Getting Your Bloke On: Gender Issues in the Reality Competition 'I Will Survive'
Communication Faculty Publications
Download
Document Type
Presentation
Publication Date
Disciplines
Abstract
The Australian reality competition "I Will Survive" set out to find a cast replacement for the leading role in the Broadway production of "Priscilla, Queen of the Desert." The stage version closed halfway through production the series, forcing a repositioning of the competition as the search to find "Australia's next triple threat." Even when the main prize was a role as a drag queen, however, the series presented a heterocentric approach to gender that treated drag less as a means of personal expression than as a part in a play that just happened to be about two gay men and a transexual, thus reinforcing the dominant culture's views of the gay male body as something exotic and undesirable.
Comments

This paper was originally presented at the 2013 Association for Theatre in Higher Education Conference in Orlando Florida. It is posted here with the permission of the author.

Citation Information
Frank Miller. "Getting Your Bloke On: Gender Issues in the Reality Competition 'I Will Survive'" (2013)
Available at: http://works.bepress.com/frank_miller/1/