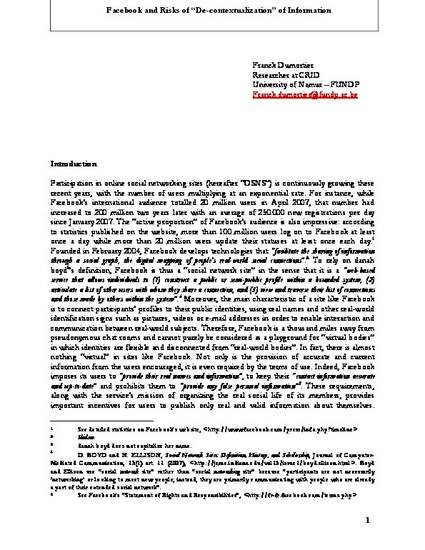 Participation in online social networking sites (hereafter “OSNS”) has dramatically increased in recent years. Services such as the well known Facebook and Myspace but also Frienster, WAYN, Bebo, Google’s Orkut and many others have millions of registered active users and are continuously growing. The most common model of such sites is based on the presentation of the participants’ profiles and the visualisation of their network of relations to others. Also, OSNS connect participants’ profiles to their public identities, using real names and other real-world identification signs (like pictures, videos, e-mail addresses, etc.) in order to enable interaction and communication between real-world subjects. Hence, a site like Facebook cannot purely be considered as a playground for “virtual bodies” in which identities are flexible and disconnected from “real-world bodies”. Not only is the provision of accurate, current and complete registration information from the users encouraged, it is even required by Facebook’s terms of use. This requirement, along with the service’s mission of organizing the real social life of its members, provides important incentives for users to publish only real and valid information about themselves. This accurate information being provided, privacy threats derive from interactions on Facebook. In this paper, I argue that the main privacy risk on Facebook is the one of “de-contextualization” of the information provided by the participants. According to me, this “de-contextualization” threat is due to three major characteristics of Facebook: 1) the simplification of social relations, 2) the large information dissemination and 3) the network globalization and normalization effects of Facebook. The “de-contextualization” phenomenon not only threatens the right to data protection, meaning the right to control the informational identity a Human being projects in a certain context. More fundamentally it threatens the right to privacy as a Human right: the right of the human being to be a conscious multiple and relational self without unjustified discrimination.