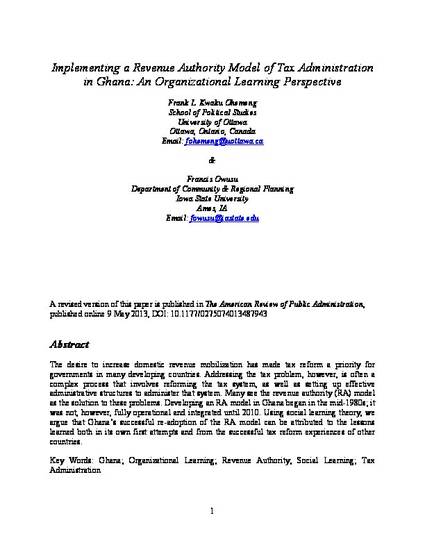 Article
Implementing a Revenue Authority Model of Tax Administration in Ghana: An Organizational Learning Perspective
The American Review of Public Administration
Download Find in your library
Document Type
Article
Disciplines
Publication Date
DOI
10.1177/0275074013487943
Abstract
The desire to increase domestic revenue mobilization has made tax reform a priority for governments in many developing countries. Addressing the tax problem, however, is often a complex process that involves reforming the tax system, as well as setting up effective administrative structures to administer that system. Many see the revenue authority (RA) model as the solution to these problems. Developing an RA model in Ghana began in the mid 1980s; it was not, however, fully operational and integrated until 2010. Using social learning theory, we argue that Ghana’s successful readoption of the RA model can be attributed to the lessons learned both in its own first attempts and from the successful tax reform experiences of other countries.
Comments