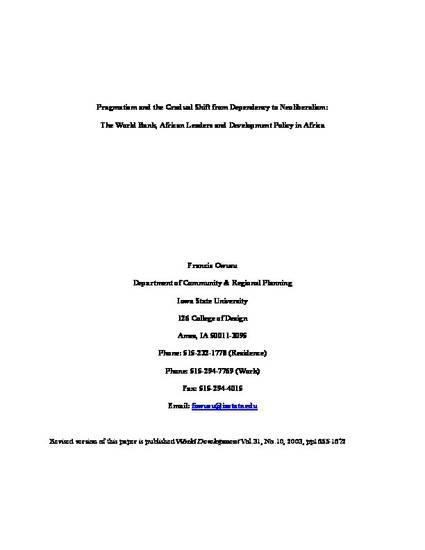 The long-standing disagreement between the international community and African leaders over an appropriate development strategy has been settled by the World Bank’s Comprehensive Development Framework (CDF) and African leaders’ New Partnership for Africa’s Development (NEPAD). Both documents support neoliberalism and see increased global integration as the key to Africa’s development. This paper traces Africa’s journey from the dependency/neoliberalism debate in the early 1980s to the current endorsement of neoliberalism. It is argued that the overwhelming global attention and support enjoyed by NEPAD derives from its embrace of western development ideas as well as changes in the global political economy that have made reformist ideas more acceptable. NEPAD’s success will however depend on how African leaders and the international community respond to the initiative.