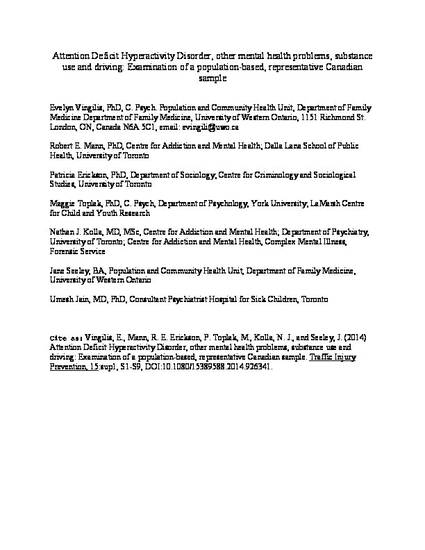 Purpose: The purpose of this study is to examine the relationships among self-reported screening measures of ADHD, other psychiatric problems, and driving-related outcomes in a provincially

representative sample of adults 18 years and older living in the province of Ontario, Canada.

Results: A total of 4014 Ontario residents were sampled, of which 3485 reported having a valid driver’s licence. Overall, 3.22% screened positively for ADHD symptoms on the ASRS-V1.1 screening tool. A greater percent of those who screened positively were younger, reported previous ADHD diagnosis and medication use, distress, antisocial behaviour, anti-anxiety and anti-depressant medication use, substance use and social problems compared to those who screened negatively. However, there were no statistically significant differences between those who screened positively or negatively for ADHD symptoms on self-reported driving after having two or more drinks in the previous hour, within an hour of using cannabis, marijuana or hash, in a street race or collision involvement as a driver in the past year. When a sequential regression was conducted to predict self-reported collisions, younger age, higher weekly kilometres driven showed higher odds of collision involvement, while the odds ratio for cannabis use ever, approached statistical significance.

Discussion: This study is the first population-based study of a representative sample of adults 18 years and older living in Ontario, Canada. These results showed no relationship between the ADHD screen and collision when age, sex and kilometers driven are controlled for. However, these analyses are based on self-report screeners and not psychiatric diagnoses and a limited sample of ADHD respondents. Thus, these results should be interpreted with caution.