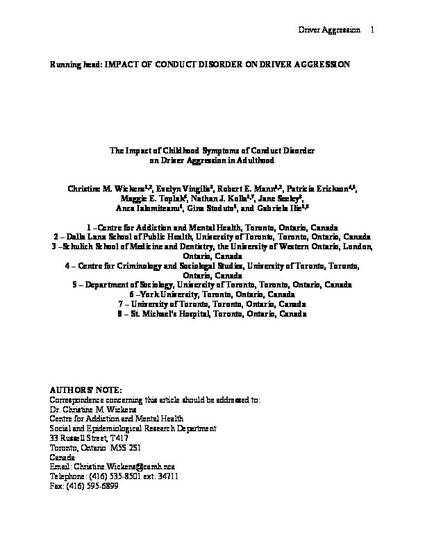 Background: Despite limited empirical investigation, existing scientific literature suggests that individuals with a history or current diagnosis of conduct disorder (CD) may be more likely to demonstrate reckless and aggressive driving. Much of the limited research in this field examines the impact of childhood CD on driver behaviour and collision risk in young adults. Few, if any, studies assess the impact of this disorder on driver behaviour beyond age 21 years. The current research is a population-based study of the impact of CD symptoms during childhood on the risk of engaging in driver aggression during adulthood.

Methods: Data are based on telephone interviews with 5,230 respondents who reported having driven in the past year. Data are derived from the 2011-2013 cycles of the CAMH Monitor, an ongoing cross-sectional survey of adults inOntario,Canada aged 18 years and older. A binary logistic regression analysis of self-reported driver aggression in the previous 12 months was conducted, consisting of measures of demographic characteristics, driving exposure, problem substance use, alcohol- and drug-impaired driving, symptoms of attention deficit hyperactivity disorder, and childhood (before age 15) symptoms of CD.

Results: When entered with demographic characteristics, driving exposure, and other potential confounders, childhood symptoms of CD increased the odds of reporting driver aggression more than two-fold (adjusted OR=2.12). Exploratory analyses of the interaction between childhood symptoms of CD and age was not a significant predictor of driver aggression.

Conclusions: Results suggest that symptoms of CD during childhood are associated with significantly increased odds of self-reported driver aggression during adulthood. Limitations and future directions of the research are discussed.