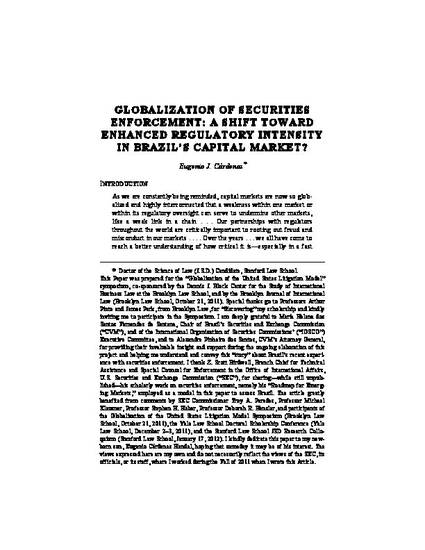 This Paper, written for the “Globalization of the United States Litigation Model” symposium at Brooklyn Law School (October 21, 2011), inquires on whether emerging capital markets are shifting toward enhanced regulatory intensity in the enforcement of their securities laws, under the context of global legal convergence. It ventures into this puzzle of globalization, corporate law enforcement, and financial development, in light of the increasing phenomenon of regulatory convergence and international cooperation among securities regulators, in the realm of capital market surveillance and enforcement.

Focus is placed on the emerging Latin American region, namely Brazil’s securities market. The study explores Brazil’s securities enforcement system during the wave of legal and institutional reform dating back to the turn of the century, resulting from competing dynamics between incumbent controlling owners resisting change, and global forces demanding enhanced corporate law and governance.

A decade onward, aim is set at identifying and reflecting upon selected instances that, when combined and analyzed, suggest that Brazil has pursued the enforcement of its securities laws with enhanced regulatory intensity — both as a result of i) adopting a more robust institutional design with enforcement structures and practices characteristic to developed global markets, and; ii) boosting implementation of these practices, in view of preliminary evidence of enforcement on the ground, in terms of actual enforcement activity and resources allocation toward market surveillance.

The evidence identifies a transformation of Brazil’s securities enforcement system during the past decade, revolving around its Securities and Exchange Commission (CVM). The research showcases how CVM came to embody features of securities enforcement systems in developed markets — like the U.S. model. These features are much in line with what the U.S. academic literature has envisioned as enforcement guidelines that emerging capital markets should follow for effective enforcement. They include, among others, CVM (1) adopting a fundamental policy to prioritize enforcement; (2) modeling its structure after the U.S. SEC’s “sole-entity” model, including an independent Board of Commissioners; (3) undergoing a conversion into an ex-post law enforcement-driven agency; (4) achieving considerable political independence from the executive branch; (5) establishing a stand-alone enforcement program with a mandate; (6) having access to an enhanced tool-kit to combat serious corporate wrongdoing in “real-time”; (7) institutionalizing the ability to settle with wrongdoers; and (8) relying on a “multiple-enforcers” approach involving active collaboration among public, private, and self-regulatory enforcement channels — by establishing partnerships with the industry, via a sophisticated self-regulatory regime, sharing the burden of market surveillance with a quasi-governmental FINRA-like SRO; with the criminal justice authorities; with the international community; and, to a lesser extent, with the judiciary. Accordingly, the latter half of the decade witnessed an increase in implementation in terms of budget, staffing, and actual enforcement activity, yielding a surge in administrative actions, sanctions, and settlements, and a more visible targeting of serious misconducts.