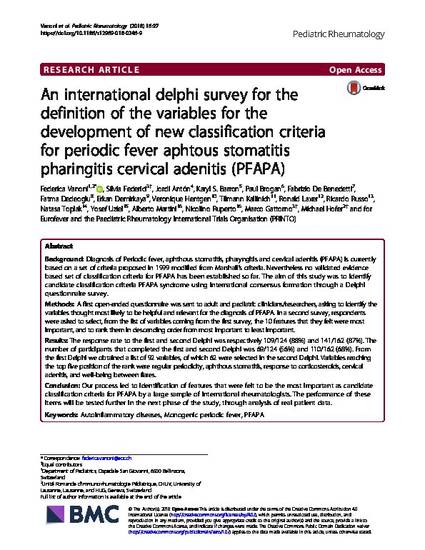 BACKGROUND: Diagnosis of Periodic fever, aphthous stomatitis, pharyngitis and cervical adenitis (PFAPA) is currently based on a set of criteria proposed in 1999 modified from Marshall's criteria. Nevertheless no validated evidence based set of classification criteria for PFAPA has been established so far. The aim of this study was to identify candidate classification criteria PFAPA syndrome using international consensus formation through a Delphi questionnaire survey.

METHODS: A first open-ended questionnaire was sent to adult and pediatric clinicians/researchers, asking to identify the variables thought most likely to be helpful and relevant for the diagnosis of PFAPA. In a second survey, respondents were asked to select, from the list of variables coming from the first survey, the 10 features that they felt were most important, and to rank them in descending order from most important to least important.

CONCLUSION: Our process led to identification of features that were felt to be the most important as candidate classification criteria for PFAPA by a large sample of international rheumatologists. The performance of these items will be tested further in the next phase of the study, through analysis of real patient data.