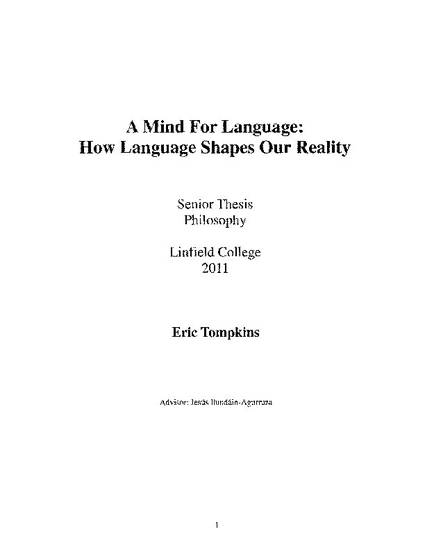 To write of language is an unusual activity, for it is to describe something by, through, and with itself. This thesis not only defends the view advanced by Sapir and Whorf of linguistic relativism, but extends their thesis with an application of Heidegger, and conflates the terms of language and self. Ultimately, I believe this endeavor is one which is not successful, but which also yields significant implications for further thought on the philosophical relevance of linguistic relativism.

Section two presents some initial thoughts on language and self; the third section describes the terms of language, whereas the fourth one describes those of the self. A fifth section then deals with the general interactions and observations of the interrelatedness between these terms, with a conclusion which highlights the main insights of the inquiry. (A brief appendix with some remarks on poetry follows this thesis.)