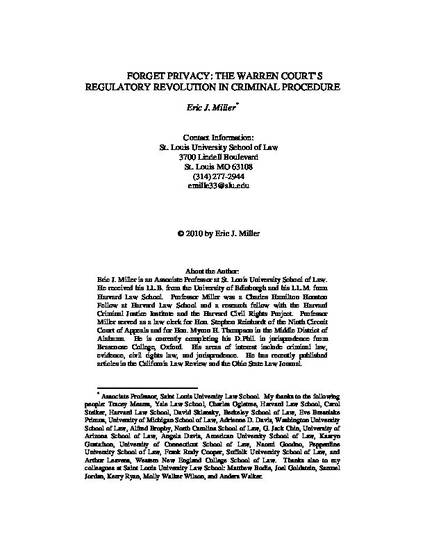 The standard story describing the Warren Court’s criminal procedure “rights revolution,” claims that the Court, motivated by liberal egalitarianism, engaged in a rights-expanding jurisprudence that made it harder for the police to search, seize, and interrogate criminal defendants. Frightened by the popular backlash against high crime rates, a cowed Court in Terry v. Ohio shifted from its rights-expanding to a rights-constricting phase, making it easier for the police to search and seize criminal suspects. Measured by this rights revolution, there were in fact two Warren Courts, a liberal and a more conservative one, emblematically separated by Terry.

The standard story is wrong. The Warren Court’s Fourth Amendment jurisprudence cannot be separated into rights-expanding and contracting phases. Rather than introducing a privacy right, the Warren Court, from the early 1960s onwards, mounted a consistent attack on pre-existing versions of the right to privacy. Rather than a privacy-protecting rights regime, the central Fourth Amendment right under the Warren Court was personal security. Extending security into areas hitherto unregulated by the law was a major concern of the Terry Court: an expansionist Terry cannot be squared with a Court in retreat in response to public outcry over crime rates.

Worse, the story produced a barren doctrinal and political account of the Fourth Amendment. Focusing on equality, anti-discrimination, and privacy too easily paints law enforcement as a repressive force whose power and numbers should be severely limited. This narrow liberalism has turned progressive attention away from the vital and difficult task of generating a doctrinal and political account of policing: its justification, intrinsic limits, and proper means of regulation.