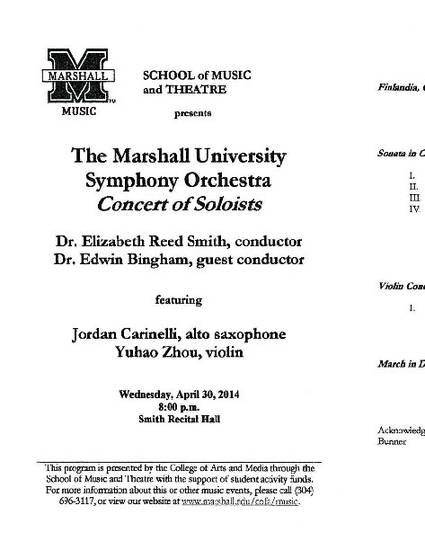 Tonight's soloists are the winners of the Concert of Soloists competition held on February 2, 2014. This competition is held on even-numbered years, and is judged by a panel of external adjudicators.

Jordan Carinelli is a junior saxophone major from Bluefield, West Virginia. A student of Dr. Edwin Bingham, he is the 2014 recipient of the Paul A. Balshaw Award, and will attend the American Saxophone Academy at the Eastman School of Music this summer.

A native of Lishui, China, Yuhao Zhou began violin lessons at the age of six. He spent three years at the Interlochen Arts Academy as a student of Hal Grossman and has participated in the Round Top Festival. He is a freshman violin major in the studio of Dr. Elizabeth Reed Smith.