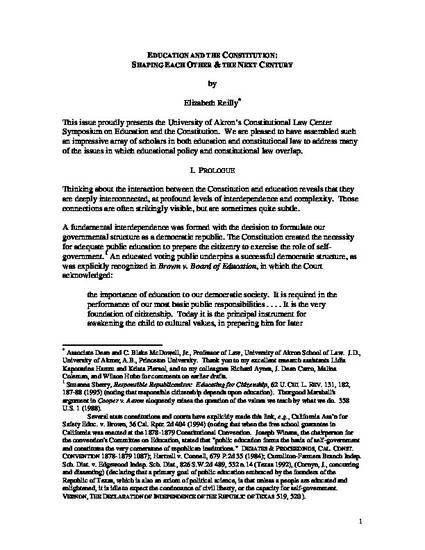 Article
Education and The Constitution: Shaping Each Other and the Next Century
Akron Law Review (2000)
Download Find in your library
Abstract

Thinking about the interaction between the Constitution and education reveals that they are deeply interconnected, at profound levels of interdependence and complexity. Those connections are often strikingly visible, but are sometimes quite subtle.

A fundamental interdependence was formed with the decision to formulate our governmental structure as a democratic republic. The Constitution created the necessity for adequate public education to prepare the citizenry to exercise the role of self-government. An educated voting public underpins a successful democratic structure, as was explicitly recognized in Brown v. Board of Education, in which the Court acknowledged:

the importance of education to our democratic society. It is required in the performance of our most basic public responsibilities . . . . It is the very foundation of citizenship. Today it is the principal instrument for awakening the child to cultural values, in preparing him for later professional training, and in helping him to adjust normally to his environment.”

But it is not only our political system that is dependent upon a viable and successful educational system. Our economic system also proclaims its reliance upon well-trained and educated workers. And our social system rests on two largely accepted goals that each require access to education--the “melting pot” which requires the successful absorption of diverse immigrant populations into a pluralistic social and cultural structure, and “upward mobility” which requires the permeability of class barriers. Both goals are achieved substantially through the education system.

Keywords
Disciplines
Publication Date
Citation Information
Elizabeth Reilly, Education and The Constitution: Shaping Each Other and the Next Century, 34 Akron Law Review 1 (2000).