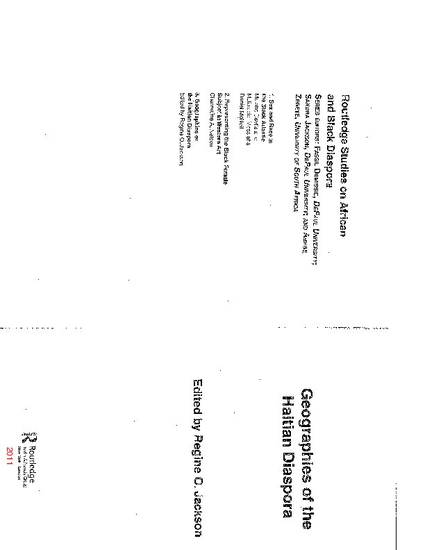 Contribution to Book
Listening for Geographies: Music as Sonic Compass Pointing Towards African and Christian Diasporic Horizons in the Caribbean
Geographies of the Haitian Diaspora (2011)
Download
Abstract

Can musical sounds reveal history, or collective identity, or new notions of geography, in different ways than texts or migrating people themselves? This essay offers the idea that the sounds of music, with their capacity to index memories and associations, become sonic points on a cognitive compass that orients diasporic people in time and space. Whereas researchers often focus on the national diasporas produced through the recent shifts and flows of globalization, I illustrate some of the limits of the concept of national and ethnic diaspora to understand how Caribbean groups form networks and imagine themselves to be situated. This essay listens to grassroots religious musical productions in order to show that Afro-Caribbean groups can stake out multiply diasporic identities in overlapping diasporic spaces through the various political registers of tribe, kingdom, and nation. I argue that even groups with self-consciously diasporic identities premised on a national past and culture can form extra-national identities through a Christian religious imaginary that mimics salient features of ethnic diasporas. I also show how even though evangelical Protestantism is not a diaspora in the established sociological sense, many Caribbean Christians conceive of their ‘spiritual lineage,’ their past and their future, in ways that mirror a ‘classic’ diasporic consciousness. This Christian diasporic sensibility comes precisely out of the genealogy of diaspora in Judaism and its appropriation by Christian thinkers. Music making in its multiple indigenous forms is a central part of what allows evangelicalism to grow and accompany the many diasporas in the Americas.