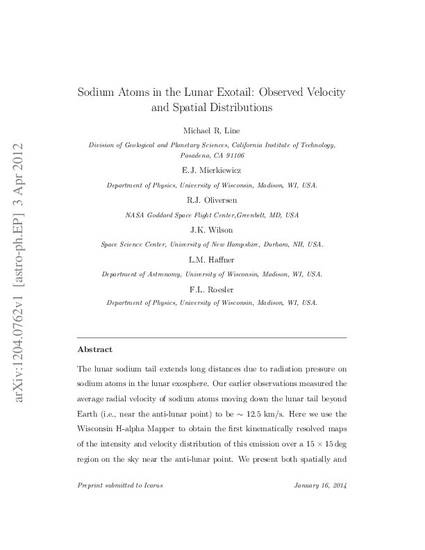 The lunar sodium tail extends long distances due to radiation pressure on sodium atoms in the lunar exosphere. Our earlier observations measured the average radial velocity of sodium atoms moving down the lunar tail beyond Earth (i.e., near the anti-lunar point) to be ∼12.5. km/s. Here we use the Wisconsin H-alpha Mapper to obtain the first kinematically resolved maps of the intensity and velocity distribution of this emission over a 15° × 15 ° region on the sky near the anti-lunar point. We present both spatially and spectrally resolved observations obtained over four nights bracketing new Moon in October 2007. The spatial distribution of the sodium atoms is elongated along the ecliptic with the location of the peak intensity drifting 3° east along the ecliptic per night. Preliminary modeling results suggest the spatial and velocity distributions in the sodium exotail are sensitive to the near surface lunar sodium velocity distribution. Future observations of this sort along with detailed modeling offer new opportunities to describe the time history of lunar surface sputtering over several days.

Dr. Mierkiewicz was not affiliated with Embry-Riddle Aeronautical University when this paper was published.