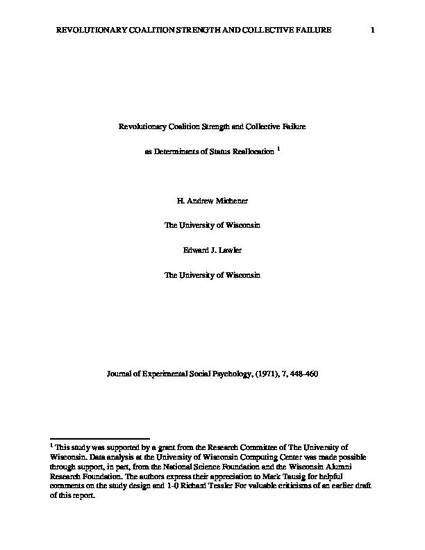 This experiment investigated the effects of collective performance and coalition strength on the redistribution of status prerogatives in triads. A status hierarchy was established within triads, such that one person held higher control status and the two others held lower status. Each group performed an ambiguous, decision-making task over two trials. Collective performance (i.e., success vs failure) was manipulated via bogus feedback regarding the group’s performance, while coalition strength was manipulated by varying the extent to which the two low-status members, acting together as a revolutionary coalition, could damage the outcomes received by the high-status member. Results indicate a collective-performance main effect, with the control prerogatives of the high-status person being reduced more under failure than under success. This effect is mediated by member dissatisfaction with the group’s activities. As predicted, the results also indicate a significant Collective Performance X Coalition Strength interaction effect. Strong coalitions achieved more extensive reallocation of status prerogatives than weak ones, but this occurred only on the second trial for groups experiencing recurring failure. This effect elucidates some of the difficulties involved in mobilizing joint efforts to exercise coalition-based influence.